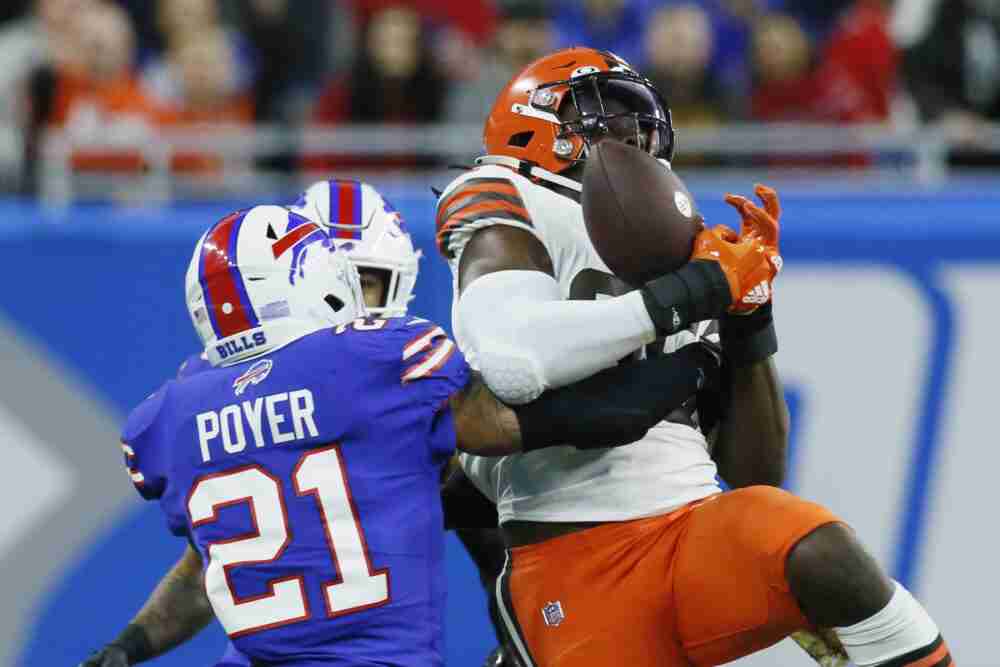 The season feels like it could implode at any moment for the Browns.

Defensive coordinator Joe Woods seems to be hanging onto the job by a thread as his unit continues to get torched. The special teams under coordinator Mike Priefer haven’t been much better. And after a 31-23 loss to the Buffalo Bills on Sunday in Detroit, All-Pro defensive end Myles Garrett criticized a lack of emphasis in practice on forcing takeaways and safety Grant Delpit said of the defense “if you don’t know what you’re doing, then it never works.”

Tight end David Njoku was adamant the team remains “100 percent” united despite dropping to 3-7 with their sixth loss in seven games.


“I feel like we’re all here for a reason, for a purpose, and it’s up to us to figure it out,” he said Monday. “No one got us here in this position besides ourselves. We’re all a team and we all got to do this together.

He objected to the notion the season could be over with seven games left.

“It’s a lot of football to be played,” he said. “It’s far from over. We have fighters on this team and we’re not just going to turn our backs out for anybody.

Coach Kevin Stefanski said he’d talk with Garrett and Delpit about their comments.

“When you are 3-7, there is frustration,” Stefanski said. “The bottom line is every person in this building — players, coaching staff and you name it — have to have that attitude of fixing anything that needs to be fixed. That is where our focus is today.”

As the drumbeat to fire Woods grows louder in the media and on social media, Stefanski wouldn’t go there when asked about it twice.

Later Stefanski was asked what’s keeping him from making an in-season change with Woods or Priefer.

“My focus really is on this week and what we can do this week to find a win,” Stefanski said. “I understand frustration. I get it. I own it. I own all of it. We have to share it as players, coaches and staff.”

He was NFL Coach of the Year in 2020 after snapping the franchise’s 17-year playoff drought but has lost 11 of the last 16 games. He was asked about the support and encouragement he receives from ownership.

“We meet every week with ownership. They are here every day, so great conversations throughout the day,” Stefanski said. “We are all frustrated — I get that part of it — but again, the focus is on this week and what we can do this week to go 1-0.”

Woods has been the most popular target of fans, as the defense ranks 31st in points allowed (26.9), better than only the Lions (28.2). Woods was one of Stefanski’s first hires in 2020 and there’s continuity within the defensive staff and many of the players, yet the unit has regressed this year.

After a strong start Sunday, the defense allowed the Bills to score on seven straight possessions and rush for 171 yards. The Browns have allowed at least 160 rushing yards in five of the last seven games.

“Definitely want to do that,” he said. “I don’t feel like he’s on the hot seat. I don’t think all the pressure or all the blame should be on Joe. He’s a great coordinator and has a great defense and we’ve just got to do our part and go out there and execute it to the best of our abilities.”

Ward believes the players are still pulling in the same direction and sees strong effort that will continue despite the record and long odds of making the playoffs.

“I feel I know these guys and they’re competitors,” he said. “Come practice, the guys are going hard, competing, they love being here, love playing, so I don’t think guys are checking out or turning on each other. I think we’re still focused on the main thing and the main thing is trying to find a way to get a win.”

Delpit didn’t specify if he thought the coaches needed to do a better job with preparation, or it was up to the players to master their responsibilities. Ward dismissed the idea the defense is too complicated.

“Not at all,” he said. “It’s the same defense as last year and I feel we did well last year. It’s a good defense. We just gotta get everybody on the same page and buy into it and find a way to get our jobs done and execute.

“It takes everybody, it’s guys going and getting into the playbook but also just having communication with the coaches and players on what’s the assignment and what we’re supposed to be doing and how to execute it.”

The Bills took a 13-10 halftime lead when No. 1 receiver Stefon Diggs ran free in the back of the end zone after a motion confused the defense. Miscommunication in the secondary and awful run defense have been recurring problems. The Browns are 23rd against the run, allowing 135.1 yards a game.

“You are trying to do anything you can to get the results you are looking for,” Stefanski said. “In order to play good run defense, schematically we have to make sure that we play fast, can fit our gaps and be sound in everything that we are doing. We will continue to look at it and find a way because teams are going to continue to try to run the football, and we have to stop it.”

Njoku is on the other side of the ball but believes the players are responsible for the record and righting the ship.

“I feel like it’s up to us to figure this out,” he said. “I just feel like with the guys that we have here, we have too much talent to just say that it’s anything else other than execution. So we just have to execute and we will. Don’t get it twisted. We definitely will.”