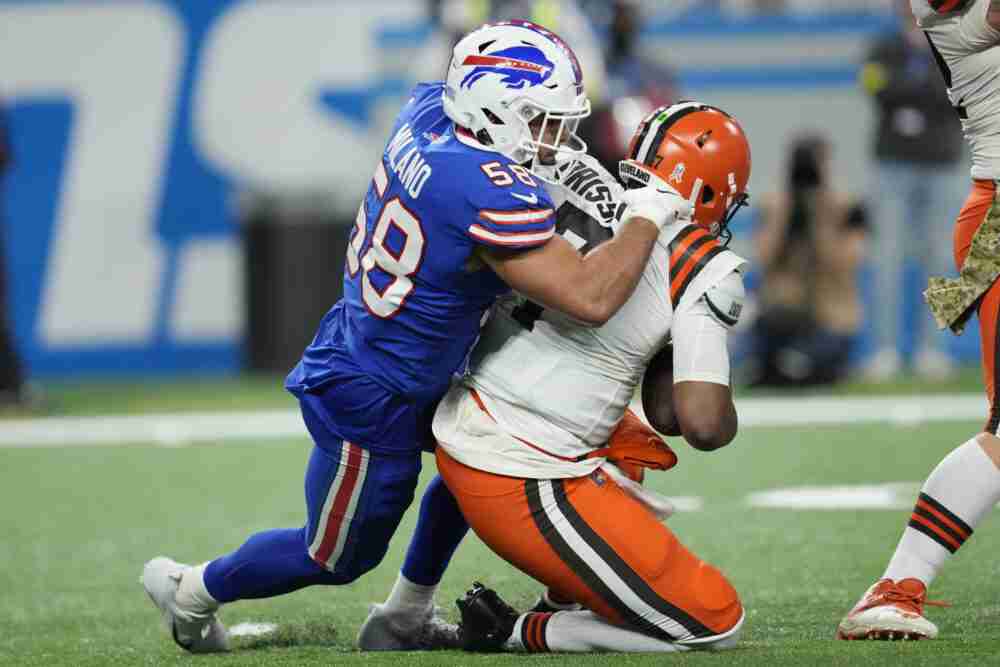 A team that was supposed to be good, but isn’t,

Was supposed to play in Buffalo — but didn’t.

It instead played in Detroit,

And so the season marches grimly on, with the left hand still not knowing what the right hand is doing.

This isn’t a team. This is a collection of independent contractors.

They’ve lost six of their last seven games and seven of their last nine. Overall, they have lost all but three of the 10 games they have played, but at least they’ll get a top-10 draft pick out of this mess, right?

I’m no Bill Belichick, but I don’t think this is a good stat: The Browns have as many blocked field goal attempts as wins, three.

If this were a restaurant, you’d ask to see the chef. His name is Kevin Stefanski, who following his team’s loss Sunday to the displaced Buffalo Bills, said, “We didn’t do enough as a team to beat a good team.”

Let’s go out on a limb here and say that’s because the Browns are a bad team.

On Sunday, Jimmy and Dee Haslam’s Flying Circus and Football Revue rolled into Detroit to play a team from Buffalo that took the field with more legitimate reasons for playing a stinker of a game than you could shake a snow plow at.

For starters, the Bills had to abandon their homes, their families, their home stadium and their home city in order to fly to Detroit because the Greater Buffalo area lost a pillow fight with Mother Nature. The city was smothered with snow — feet, not inches.

The NFL can be a cold and unforgiving league. It’s every franchise for itself. When you get a good break, you’d better make the most of it, because when the other guy gets a break, he’s going to do the same to you.

The Super Bowl-contending Bills showed up in Detroit having lost their previous two games, with their King Kong quarterback Josh Allen nursing a sore arm and with uncertainty in their private lives, thanks to that massive snow dump back home in Buffalo.

The Browns showed up in Detroit dragging their 3-6 record, but with the knowledge that they were facing a potentially psychologically wounded opponent that had lost its last two games and was playing with a sore-armed quarterback.

Then the game began and, it seemed, the rout began.

With 15 seconds left in the first half, the Browns were winning 10-6.

But with 14 seconds left in the half, the Browns were losing 13-10, when Allen found Stefon Diggs inexplicably alone in the back of the end zone. Allen’s pitch-and-catch touchdown pass gave the Bills a lead they never relinquished.

They did manage to score two too-little-too-late touchdowns in the fourth quarter, one of them on a TD grab by the exquisite Amari Cooper, who has distinguished himself in his team’s season of shame with his towering professionalism and sensational consistency.

But that some of his teammates would follow suit.

In tumbling to 3-7, Cooper’s teammates continue to exhibit only sporadic cohesiveness. As in most of their games, there were occasional pockets and moments of individual excellence, but it rarely leads to anything. Too many times they have to overcome themselves, in addition to their opponents.

What can be said, how much can be expected, of a team whose bread-and-butter play is the quarterback sneak? Even that old friend abandoned them in the second half Sunday, when Jacoby Brissett, on back-to-back third-and-1 and fourth-and-1 situations, couldn’t convert either.

When you lose the ability to move the ball 3 feet when needed, what’s your fallback plan?

Certainly not this: In the second quarter, Harrison Bryant and Pharaoh Brown dropped consecutive passes that would have been touchdowns. Guess that’s why they call them “tight” ends.

Meanwhile, Deshaun Watson’s debut is only two weeks away.

Browns-Bills Preview: 3 things to watch, 3 key numbers, the prediction
Commentary: This Browns ownership could be the worst in franchise history