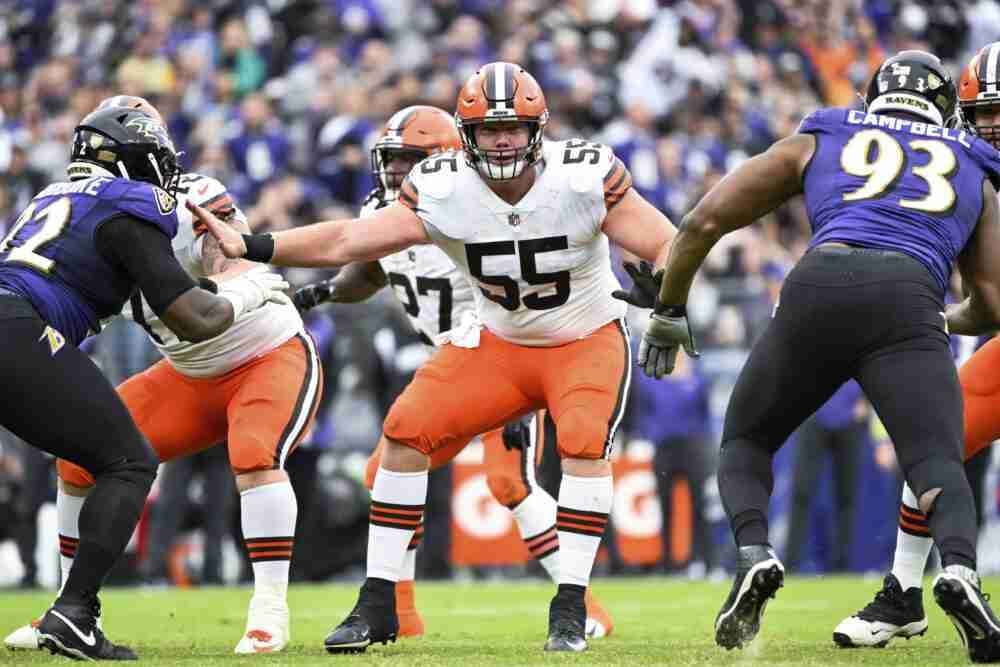 The Browns suffered a significant blow to the offensive line Sunday in the 31-23 loss to the Buffalo Bills in Detroit.

Center Ethan Pocic suffered a knee injury that will sideline him for multiple weeks, coach Kevin Stefanski announced Monday, adding he didn’t know just how long Pocic would be out. The Browns are 3-7 and have seven games left.

Pocic was hurt on the first snap, stayed in one more, then exited and didn’t return. He was replaced by Hjalte Froholdt, who will remain in the starting lineup during Pocic’s absence.


Froholdt is normally a guard, but the Browns are thin at center. Nick Harris was set to be the starter but was lost for the season with a knee injury in the preseason opener. Michael Dunn probably would’ve stepped in for Pocic but was placed on injured reserve Saturday with a back injury.

Pocic, 27, was signed as a free agent in the offseason, hadn’t missed a snap all season and played great, helping lead the way for the fifth-ranked run offense (150.9 yards a game). Pro Football Focus graded him as the second-best center and the best run-blocking center.

The Browns missed him against the Bills.

Froholdt had played a bunch at right guard over the four previous games, including the first two starts of his career, as Wyatt Teller missed time with a calf injury. Froholdt doesn’t spend much time at center in practice but was forced into action.

Quarterback Jacoby Brissett lost a fumble when he didn’t get the snap cleanly from Froholdt on the Buffalo 47-yard line in the second quarter. Then in the third quarter, Brissett was stopped on sneaks on third-and-1 and fourth-and-1 as he tried to go up the middle.

“Hjalte came in and did a great job,” he said. “Obviously on short notice.”

Right tackle Jack Conklin left in the fourth quarter after his foot injury was aggravated, but Stefanski said he should be OK to play this Sunday against the Buccaneers at FirstEnergy Stadium.

The coaches want rookie kicker Cade York to work on elevating the ball. He had a 34-yard field goal blocked by the Bills, which followed the Ravens blocking a 60-yarder and the Bengals a 53-yarder.

“It is a focus of ours that we have to make sure we are working on with Cade,” Stefanski said. “Have to have a high trajectory on those kicks.”

The Browns went with Sione Takitaki at middle linebacker in place of Deion Jones, who had started the previous two games after being acquired in a trade with Atlanta. Takitaki played 58 of 65 defensive snaps (89 percent), making nine tackles.

He’s the fourth starting middle linebacker this year. Anthony Walker Jr. (quadriceps) and Jacob Phillips (pectoral) are out for the season.

Jeremiah Owusu-Koramoah played 62 snaps, and Tony Fields II was the third linebacker in the base defense, playing a career-high 26 snaps. Jones played eight.

Owusu-Koramoah led the team with 12 tackles, including one for loss, and had a quarterback hit.

“Played a lot. Played sideline to sideline,” Stefanski said. “Wasn’t perfect. There are plays that I know he wants back. Gave great effort. Tried to fight to get guys on the ground and fight to get the ball out.”

Nick Chubb carried 14 times for 19 yards, and the 1.4 average was the lowest of his five-year career when getting at least four carries. He had six runs that combined to lose 18 yards.

“First of all, they did a nice job in that scheme,” Stefanski said of the Bills. “They were penetrating. There are things that we can do to give Nick and our backs a better opportunity, but we have to run the ball better obviously, and I think we will.”

Chubb has been held below 100 yards in four of the last five games, slipping from first to fourth among rushing leaders. He has 923 yards, 87 behind leader Derrick Henry of the Titans, and is 10th with 5.3 yards a carry.

Notes: Hjalte Froholdt pressed into service at center after Ethan Pocic leaves on opening drive with knee injury
Notes: Joe Thomas’ march to Hall of Fame continues with announcement he’s one of 28 semifinalists