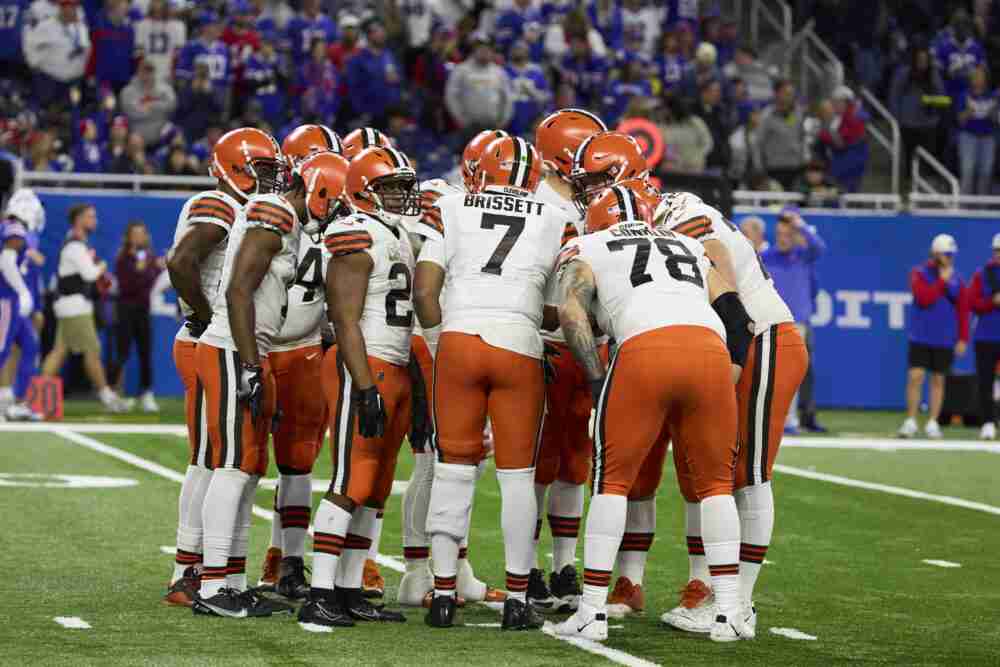 BEREA — Jacoby Brissett knew this week was coming. And the questions, too.

“You guys gotta stop saying that last start stuff,” he said Wednesday after a reporter prefaced a question with another reference to Brissett’s time as the starting quarterback about to end with the return of Deshaun Watson next week from an 11-game suspension.


Brissett, 29, signed with the Browns in March because of the opportunity to start while Watson would be disciplined after more than two dozen women accused him of sexual misconduct during massage therapy sessions. Brissett didn’t know how long Watson would be out but wanted a chance after being a backup the previous two seasons.

“I signed up for this, I knew what I was getting myself into, I knew this wasn’t going to be an easy task,” he said. “I didn’t sign up for easy, I wasn’t brought here for easy. And I knew I was the right person for it, and I still believe that I am. I think I’ve shown that.”

#Browns Jacoby Brissett on his unique role this season. pic.twitter.com/h2wuLBF5ib

Brissett, who was the starter for the Colts in 2017 and ’19, will slide into the background next week when Watson returns to face his former team, the Houston Texans. Watson has already taken some of Brissett’s repetitions since returning to practice last week.

Brissett’s completed a career-high 64.4 percent for 2,398 yards, 7.2 yards per attempt, 11 touchdowns, five interceptions and a career-high 90.7 passer rating. He believes he’s shown he’s a starting-caliber quarterback despite the team’s 3-7 record.

“Oh, for sure. Yeah, definitely,” he said. “That’s why I was brought here, because the Browns understood that, too. I think I went out and proved myself right.”

An opportunity to start won’t come with the Browns — “I’m aware,” Brissett said — after they traded a net of five draft picks to the Texans for Watson, then gave him a five-year, fully guaranteed $230 million contract. So does Brissett want to come back, knowing he’d be No. 2 on the depth chart?

He would be missed. Not only has he played well, he’s become beloved in the locker room.

“Jacoby’s been amazing for us,” running back Nick Chubb said. “He’s a great person overall and a very good player. He’s done a lot of great things here.

“I love him. I love playing beside him. I know this last game he’s going to give his all for us.”

Brissett’s established himself as a true team leader.

“Just how he carries himself,” Chubb said. “He’s a great leader. He’s not afraid to speak up. He’ll tell you how he feels.

“He plays hard. That last game against Buffalo, Jacoby, he wanted to win more than anybody. He was not going to stop until we won that game. He played his heart out and that shows you what type of guy he is.”

Second-year linebacker Jeremiah Owusu-Koramoah lockers next to Brissett and they’ve bonded throughout the year.

Brissett wasn’t ready to fully reflect on his time as the starter. He’s got one more game — against Tampa Bay and quarterback Tom Brady. Brissett was drafted by the Patriots in the third round in 2016 and spent his rookie season as a backup to Brady before being traded to the Colts.

“I would tell you he has performed how we thought he would in his role,” coach Kevin Stefanski said. “More than that, he has provided outstanding leadership for this football team. Good in the quarterback room, good in the offensive meeting room and good with the team. Has provided a very balanced approach to the group.”

Stefanski appreciates how Brissett is handling the transition to Watson.

“Now, Jacoby’s mindset and our mindset is a one-week mindset. I think he has really performed well because he has done that,” Stefanski said. “He focuses on what is in front of him, and that is this Tampa game.

Brissett said it’s funny someone would ask about him pouring his heart into this team and season in the temporary role.

#Browns Jacoby Brissett on putting everything into his starting opportunity this year. pic.twitter.com/BTRisXstzl

“It’s like, ‘Am I not supposed to do that?’” he said. “That’s what I signed up for. I don’t think I should be commended on doing my job and doing what I’m supposed to do and what I told myself and everybody else that I was going to do.

“Obviously I envisioned us winning more games. But we didn’t, we haven’t so far. But we’ve got another opportunity to go out there and get the win this week. So, yeah, excited for this one.”

Despite the team’s evaporating playoff chances, Brissett noted the season “isn’t over” and the players remain engaged. He isn’t drawing extra motivation from facing Brady, a seven-time Super Bowl winner who’s considered the greatest quarterback of all time.

“I just want to win,” Brissett said. “I don’t care who it’s against. Fortunately it can be him, so just looking forward to it.”

Win or lose, he’ll move behind Watson on the depth chart and in the practice rotation. His influence will remain front and center.

“For sure,” Chubb said. “I mean, he’s still going to be here. Him and Deshaun are very close, too, so I’m sure he’ll be able to talk to Deshaun about things he sees and they can communicate that. But overall he’ll still be a leader for us going on.”

Myles Garrett after latest loss: We are too good of a team to have this record
Myles Garrett doubles down on need for takeaways, knows they won’t be easy to come by against Tom Brady