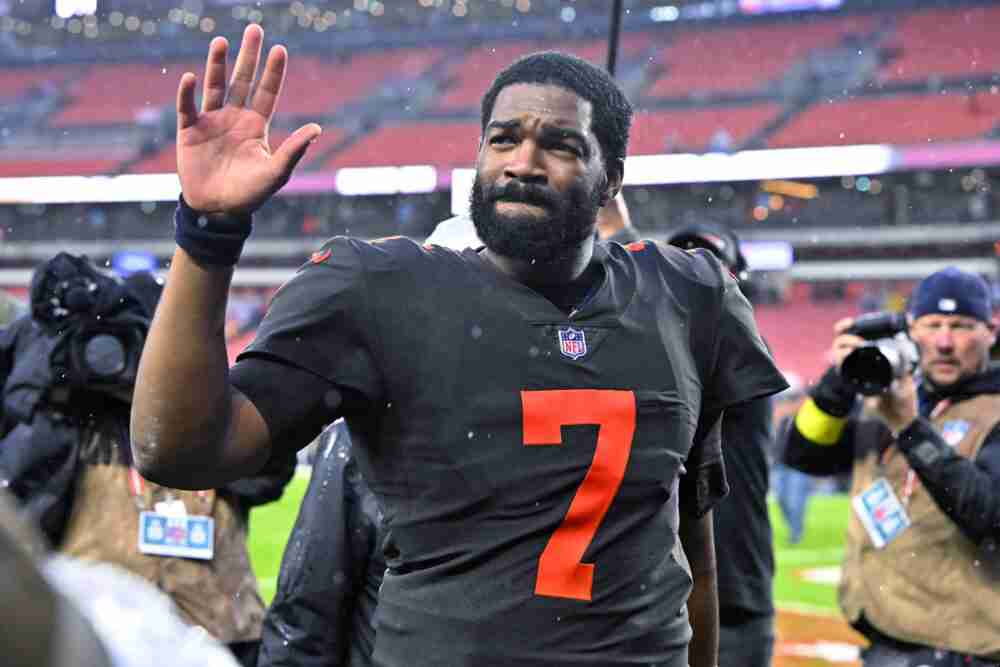 On Sunday, the latter, and his team, took the former, his team and his seven Super Bowl rings into overtime — and beat him.

It couldn’t have been a better going-away party for classy Jacoby Brissett.

“I just gave him the game ball,” said Browns coach Kevin Stefanski. “I’m really happy for Jacoby. He is a great leader and a great teammate. He battled like crazy.”

That in doing so he beat the greatest quarterback in history was icing on a soggy cake in the Browns’ 23-17 win over Tom Brady’s Tampa Bay Bradys in the rain at FirstEnergy Stadium.

With the victory, the curtain drops on Brissett’s 11-game Waiting for Watson command performance, necessitated by Deshaun Watson’s 11-game suspension for, well, you know why.

Talk about going out on a high note.

At the end of regulation, he guided the Browns on a six-play, 46-yard tying touchdown drive that ended with Brissett throwing a fastball to the back of the end zone, where David Njoku made a spectacular catch with 32 seconds left in the fourth quarter.

Then, near the end of overtime, in a walk-off performance for the ages, Brissett gave the visitors the full Jacoby, leading the Browns on a six-play, 71-yard winning touchdown drive that ended with Nick Chubb chugging into the end zone with only 19 seconds left in overtime.

Brissett’s numbers weren’t great. He completed 23 of 37 passes for 210 yards, one touchdown, one interception and he was sacked four times.

But when the game was on the line, Brissett out-Bradyed Brady and turned the Browns’ fourth win of the season into a Jacoby Jamboree.

“This was a great one to end on,” said Brissett, “but this has never been about me. This has been about the team. This was our team’s opportunity to step up in a big moment and I think we did that.”

But then the Browns traded for Watson, and the suspension that was part of his considerable baggage. The Browns knew they’d need a quarterback to run the ship during Watson’s absence.

They signed free agent Brissett, who in his 11 games as Watson’s replacement put on a clinic in egoless, team-first leadership. He never blinked at the challenge, and bookended his 11-game season with victories: a 26-24 win at Carolina in his first day on the job and Sunday’s 23-17 heart-pounder in his last game in the driver’s seat.

Although he hit a couple speed bumps along the way, the likable Brissett, who unlike so many others in his profession doesn’t take himself too seriously, provided the Browns with upper-level backup quarterback work.

A case could even be made that to this point in the season Brissett is arguably the Browns’ MVP. That sounds like faint praise for a team with a record of 4-7. But it could also be said that in today’s NFL, the only thing harder than being a starting quarterback is being a quality backup quarterback.

Brissett has been that and then some. Part of being a good backup quarterback is accepting the title. Brissett crossed that bridge and came to terms with it long ago.

“I don’t take being in the locker room lightly, or being in the huddle and going to work with these guys,” he said. “I don’t take that lightly. I just try to go out there and be myself, put my best foot forward, work hard and be somebody the players can lean on. That is better than the win.”

It’s not often that you hear professional athletes talking like that. That’s not lip service. It’s what makes Brissett so popular on the team. It’s what makes him a quality backup. In many ways Brissett is a player who talks the way coaches think. The saying is, “he gets it.”

Brissett gets it, and it’s because he does that he will continue to be a sought-after backup quarterback. The Browns, indeed, should probably make sure this isn’t a one-and-done season for him in Cleveland.

Starting next Sunday, in Houston, Brissett goes back to being a backup, his more familiar role. But he’ll always savor the thrill of Sunday’s victory.

“I mean this in no disrespect,” he said, “but in the words of Tom Brady, that was (bleeping) awesome.”