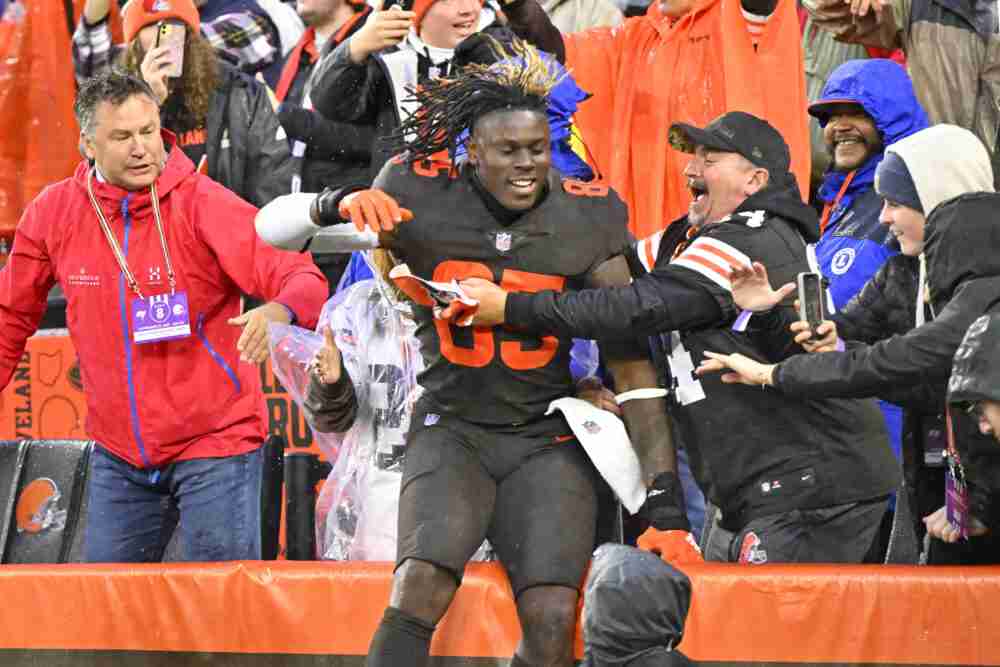 CLEVELAND — Quarterback Jacoby Brissett didn’t like the play call when he first went over the game plan with the coaches Saturday.

He loved it Sunday.

Tight end David Njoku made a one-handed catch in the back of the end zone for a tying 12-yard touchdown with 32 seconds left in regulation that allowed the Browns to beat the Buccaneers 23-17 in overtime at FirstEnergy Stadium. Njoku ran down the left seam against linebacker Devin White and extended his left arm for the impressive grab.

“Originally I didn’t like that play versus that coverage,” Brissett said. “I was like, ‘I want something else.’”

“It was like, ‘Well, because we have one of our best players the opportunity to be one-on-one because they are doubling everybody else in this coverage,’” Brissett said. “I threw it, and I thought I threw it too high.”

“I don’t know what the hell he was saying before about ‘too high,’” said Njoku, who had five catches for 29 yards. “That was perfect. Kudos goes to him.”

The importance of the catch can’t be overstated. It came on fourth-and-10 and the Browns had only one timeout left. Tampa Bay quarterback Tom Brady would’ve ended the game by kneeling twice if Njoku hadn’t hauled in the throw.

“It was a nice catch, but the game was not finished,” Njoku said. “I am just glad that we finished the right way.”

He took a low-key approach, but his coaches and teammates conveyed the magnitude of the play.

“Unbelievable,” Stefanski said. “Tried a screen to Dave on the play before and thought we might be able to spring one, and it was close. When you are calling those plays, you are thinking about players and not plays. I am calling the play, I am seeing the coverage and I am thinking Dave the whole time, and Jacoby is thinking the same. Gave a great ball to where that ball has to be, and Dave goes up and does what Dave does.”

“David’s catch is probably an all-time catch,” right guard Wyatt Teller said. “I wish it had been in the playoffs, it would have been an all-world catch.”

The touchdown gave Njoku 17 for his career, second on the franchise list for tight ends.

THE NEED FOR SPEED

Anthony Schwartz, a third-round pick in 2021, has been a disappointment and an afterthought this season but made a huge play.

He got a flip from running back Kareem Hunt and took the reverse 31 yards for a touchdown to cap the opening drive. It’s his first touchdown of the season and second of his career — the other was a catch.

Schwartz added a reception for 17 yards. For the season, he has three catches for 39 yards and three carries for 51.

“It definitely raises my confidence level up,” he said. “The team, they make it known that they still trust me. They still have full confidence in me.”

“I know when he starts running, it’s hard to slow him down,” Schwartz said of Brissett. “When he gets running at somebody, they better watch out.”

Running back Nick Chubb scored the winning touchdown from 3 yards with 19 seconds left. What’s hard to believe is he spoke in the huddle before the score.

“I was surprised, too,” Teller said. “But he was like we’re gonna win, and I believed him.”

Chubb’s also the third player in NFL history with at least 950 rushing yards and eight rushing touchdowns in each of his first five seasons, joining Adrian Peterson and LaDainian Tomlinson. With 48 rushing touchdowns, Chubb moved past Mike Pruitt for sole possession of third in franchise history. With his 28th 100-yard rushing game, he broke a tie with Leroy Kelly for second in team history.

ONE AT A TIME

“I just didn’t love our 2-point play, I will be honest, and I designed it, so blame me,” Stefanski said. “Just felt like with those body blows going back and forth kind of liked where we were on defense and felt like it was the right thing to take it to overtime.”

Brissett wanted to go for it.

“Hell yeah,” he said. “I wanted to just put them out of their misery early. Obviously knowing the situation, I know it wasn’t the right decision.”

Brady had rookie cornerback Martin Emerson Jr. in his sights throughout the afternoon. Emerson didn’t shrink from the challenge of guarding receiver Mike Evans and had four passes defensed.

“I just really, really love that kid’s mentality” Stefanski said. “Rookie corners, they know the offensive coordinator over there gets off of the bus thinking about going after a rookie corner, so the ball is coming and they may make a play here or there, but he is not afraid of it. It is fun to watch.”

Emerson was thrilled with the outcome against Brady.

“Earlier in the week, we were talking about how he’s been in the league for 23 years and I’m 22,” Emerson said. “I’ve been watching him ever since I was growing up. It feels great to beat him.”

** A skunk spent much of the game in the stands. It was first noticed in Section 140 near the tunnel to the Browns locker room.

It didn’t spray and eventually made its way out of the stadium after the game, according to a video on Cleveland.com.

** The vandalism of the FirstEnergy Stadium turf from early last week was obvious. Two large double rings marred the west end of the field but were considered superficial.

Someone turfed the field Tuesday morning, and the Browns reported the incident to the Cleveland Police Department.

** On a lighter note, Brownie the Elf’s costume was changed to camouflage for the midfield logo in honor of the NFL’s Salute to Service initiative.

Bucs right tackle Tristan Wirfs was carted off the field with a leg injury in overtime.

** Browns nickelback A.J. Green, who was filling in for Newsome, left in the second quarter, was evaluated for a concussion and didn’t return. Thomas Graham Jr. replaced him in the slot.

** Receiver Donovan Peoples-Jones had a career-long 29-yard punt return, the longest for the Browns since Antonio Callaway had a 35-yarder in 2018.

** Rookie running back Jerome Ford had a 44-yard kickoff return.