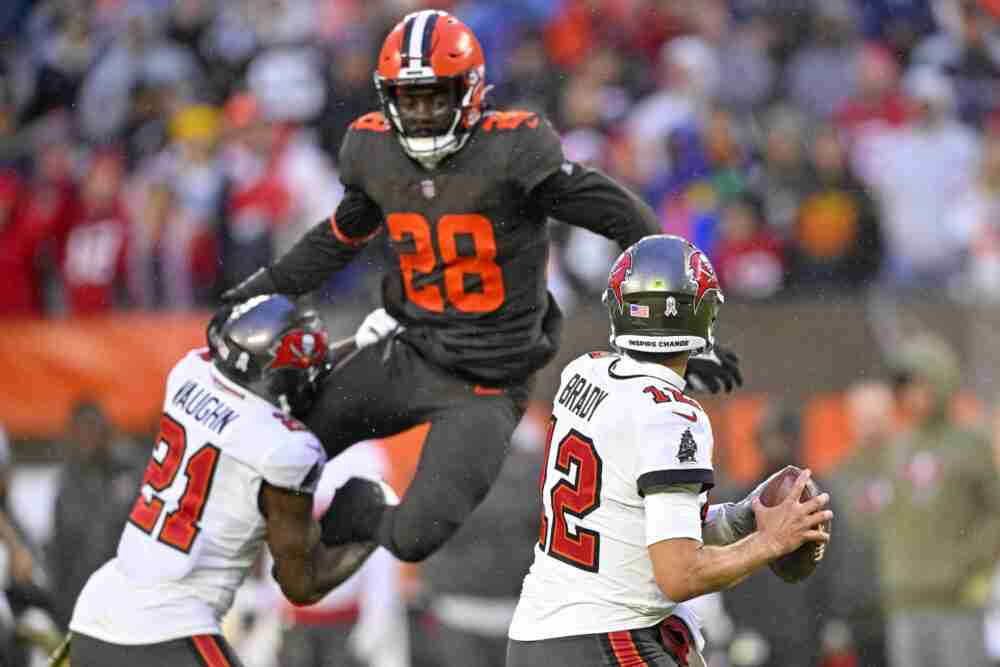 BEREA — Linebacker Jeremiah Owusu-Koramoah has been all over the field the last two games after missing three with a groin injury. He totaled 20 tackles and two for loss while playing nearly every defensive snap.

“I’m going to always talk about a balance of the game and I think once I continue to get more experience and I continue to put more intensity into it, you’ll see a more wholesome game.”

Owusu-Koramoah, a second-round pick in 2021, has talked before about playing at 100 mph while trying to eliminate mistakes. He’s still working on it but has taken “some strides.”

“JOK plays with a unique speed,” Stefanski said. “When he sees it, he goes. A lot of times, it is a really, really good play and he is making the right play. If it is not, he can put himself in a bad position because he goes so fast. Ultimately, when you are playing linebacker in this system or any system really, once you see it, you just have to go.”

Owusu-Koramoah talked last week about the need for the struggling run defense to do a better job penetrating the backfield. The Browns were much improved against the run Sunday, limiting the Buccaneers to 96 yards, including Owusu-Koramoah’s tackle for a 1-yard loss on a third-and-1.

“Before we haven’t fixed those mistakes, but now as time goes on and as time continues to come to fruition, we’re looking to execute on those things and that was one example of us executing on those,” he said.

Houston’s Dameon Pierce, a rookie fourth-round pick, has 788 rushing yards, a 4.4 average and three touchdowns and will test the Browns. Owusu-Koramoah wants to see more consistency from the defense.

“Little increments here and there,” he said. “We still have a lot of stuff to work on, a lot of mistakes to fix, but from this point, yeah, I think we’ve made some little adjustments and we’re getting better as time goes on.”

Tight end David Njoku (knee), who made a great one-handed touchdown catch Sunday to force overtime, didn’t practice and wasn’t on the field during the portion of practice open to reporters. Stefanski said it’s a different knee injury than the one that, along with a high ankle sprain, limited him in practice last week.

“We are just going to work through it and be smart,” he said, adding Njoku hadn’t been ruled out for Sunday.

** Defensive end Myles Garrett took a big hit to his sprained left shoulder Sunday and was in extreme pain during and after the game. He got a day of rest Wednesday.

“He is right where he has been,” Stefanski said. “These guys just played an overtime game on Sunday, so trying to be smart about what we do with the guys and make sure that they are fresh come Sunday.”

** For the Texans, cornerback Derek Stingley Jr. (hamstring), defensive tackle Maliek Collins (chest) and running back Rex Burkhead (concussion) were among those who didn’t practice.

The Browns will face Texans coach Lovie Smith, which means a lot of the Cover-2 defense. The zone scheme uses a pair of deep safeties, making it difficult to pass downfield but easier to run against if the defensive tackles don’t dominate.

“Obviously Cover-2 starts to show up, which you don’t see a ton of week in and week out, so you have to be really, really precise in what you are doing,” Stefanski said. “On first and second down, they are doing a really nice job of being an aggressive front and line movement. Really a focal point for us.”

Stefanski said the Texans play as much Cover-2 as any team in the league.

“It is a unique challenge,” he said. “It is scheme that I have seen work at a really, really high level. It keeps you off-balance when you can play Cover-2 and keep everything in front of you. Then you can crawl up and play man.”

Veteran center Greg Mancz had the evidence on his phone — pictures of him as a kid decked out in Browns gear.

Mancz grew up in Cincinnati and went to the University of Toledo, but his dad’s family is from the Dayton area and are “die-hard” Browns fans.

“I’m talking it’s a big deal,” said Mancz, who was signed last week after starting center Ethan Pocic was placed on injured reserve with a knee injury. “They were really happy to see the Mancz name on the back of a jersey.

“It is nice to be back in the state of Ohio. I’m from Ohio, so that’s really cool for me.”

The Texans will go with quarterback Kyle Allen for the second straight game after Davis Mills was benched. Allen’s 7-11 as a starter in his five-year career, mostly with Carolina, and has a career 83.9 passer rating.