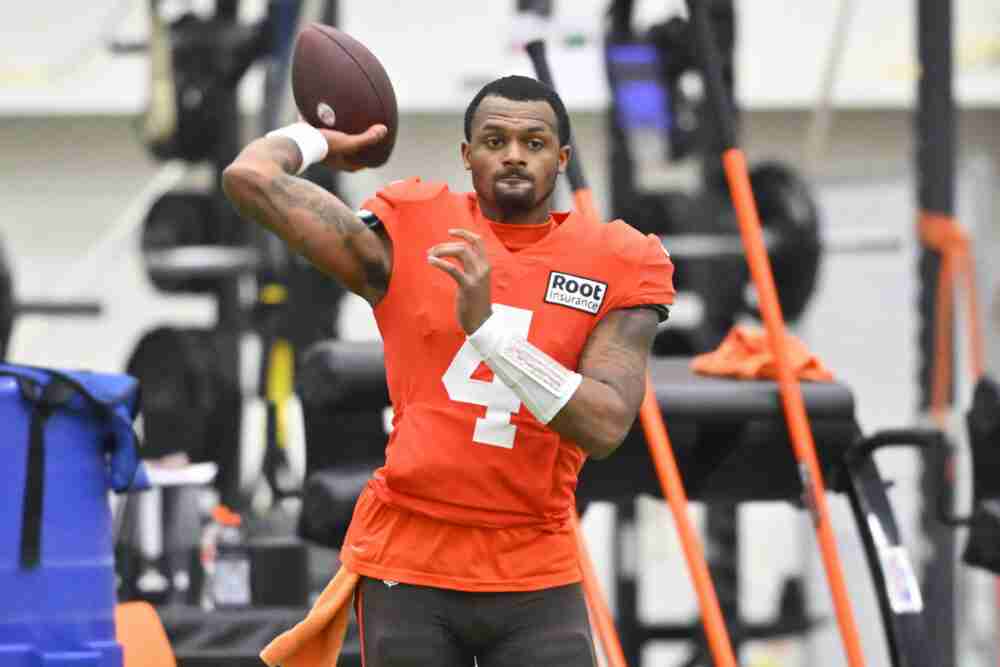 BEREA — Deshaun Watson went first in drills, took the vast majority of repetitions and zipped passes to receivers inside the field house.

Watson stepped into the familiar role of starting quarterback Wednesday in his first practice since being reinstated Monday from an 11-game suspension. He made extra throws in preparation for the start Sunday in Houston. His return was met with anticipation from teammates.

“We’re all excited. We’ve been waiting a long time for him to come back,” running back Nick Chubb said.


Watson’s return to the top of the depth chart didn’t include a stop in front of the multitude of cameras and microphones. Browns quarterbacks traditionally talk to reporters Wednesday, including Jacoby Brissett, who played well and went 4-7 filling in for Watson.

Watson made a few visits to his locker during the approximately 45 minutes media were in the locker room — “There he goes right now if you want to flip the camera on him,” linebacker Jeremiah Owusu-Koramoah said in the middle of an answer — but still hasn’t talked publicly since accepting the suspension settlement with the NFL on Aug. 18.

“That is not my department,” coach Kevin Stefanski said.

Watson is expected to speak to reporters Thursday or Friday before the Browns travel to face the Texans (1-9-1), his former team. In the meantime, his teammates answered questions about the three-time Pro Bowler.

“He’s special. He’s a playmaker. He puts the ball exactly where he needs it to go,” Chubb said. “Guys are excited. We all are. We’re ready.”

Cornerback Denzel Ward practiced against Watson in the offseason, training camp and the last two weeks and said the elite talent is obvious.

“Yeah, you definitely see that in Deshaun,” Ward said. “Just the passes he’s capable of making and just going through his reads and just the type of player that he is.”

Watson was accused by more than two dozen women of sexual assault and misconduct during massage therapy sessions, wasn’t indicted on criminal charges by a pair of Texas grand juries and settled 23 of 25 civil lawsuits. An independent arbitrator found he violated the NFL’s personal conduct policy, and he agreed to the suspension in a settlement with the league that also stipulated he pay a $5 million fine and undergo evaluation and counseling. He’s denied wrongdoing.

Watson hasn’t played in a regular-season game since the end of the 2020 season. He requested a trade from the Texans after that season, the accusations started and he sat out all of last season.

The Browns traded for him in a blockbuster deal in March, giving up a net of five draft picks, including three first-rounders. They signed him to a five-year, fully guaranteed $230 million contract.

Watson’s official return to the first-team offense Wednesday came with bright orange socks and cleats but wasn’t accompanied by fanfare or a speech.

“I feel like he’s always had control and I think everyone’s always known that he’s been a leader even though he’s not been here,” No. 3 quarterback Kellen Mond said. “I don’t think he needs to address the team. I think we just continue to move on. And everyone obviously expects him to play well.”

The suspension began Aug. 30, and Watson was banned from team facilities. He was allowed to return Oct. 10 and attend meetings and began practicing Nov. 16. He worked mostly with the scout team for two weeks but got a few reps with the starters.

“For him to actually be able to come back a little bit early instead of just getting this one week, it was huge for him and to get practice reps, kind of get acclimated to calling plays again and things of that nature, which can also be somewhat difficult,” Mond said. “But he’s done great and we’re looking forward to watching him.”

The organization seems to be trying to strike a balance between promoting and downplaying Watson’s return. Perhaps that’s natural with a player whose arrival in March was greeted with strong approval and criticism within the fan base.

“This is about us versus the Texans is really the focus,” Stefanski said.

A couple of minutes later, he added: “We are excited that Deshaun is able to play for us. We are excited that he is back out there. Having him out on the field will bring an element to our offense that is different, but how different I think remains to be seen.”

That’s one of the many important and interesting questions surrounding Watson’s debut with the Browns.

“Watson provides a diverse aspect of the offense,” Owusu-Koramoah said. “It is an excitement.”

“That element of any offense can be really frustrating to a defense,” Stefanski said.

“It helps everyone just because defenses won’t know what to do,” Chubb said. “Deshaun could throw the ball or run the ball. It makes it harder on them, obviously.”

Right guard Wyatt Teller expects defenses to respect Watson’s passing ability and remove a defender from the line of scrimmage, which would create room for Chubb and Kareem Hunt to run.

“I hope so,” said Chubb, who added the team can’t get distracted by Watson’s debut. “We won’t know until Sunday, but I’m sure they’ll have to come up with a better plan for whatever we do.”

Watson’s only game action since Jan. 3, 2021, was the preseason opener in August in Jacksonville. He went 1-for-5 for 7 yards in three series, but Stefanski doesn’t think the struggles were from the off-field stress.

“I really don’t,” he said. “I think a lot of that was just getting back in uniform, in the huddle, hearing my voice in the headset and those type of things. That was all about the preparation.

And he doesn’t think those issues will be a factor in Houston.

Attorney for Deshaun Watson accusers says some will attend game in Houston to send message ‘we matter’
Deshaun Watson excited to be back, refuses to discuss non-football issues during first interview since Aug. 18