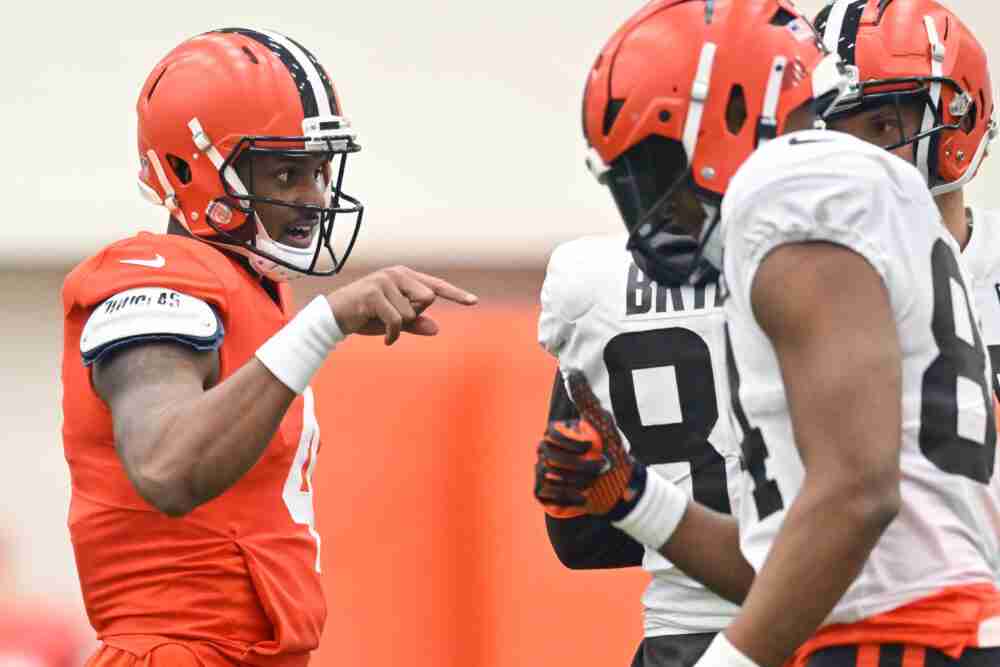 Well, here he comes, and here we go.


Because with the Browns, it’s always complicated, right?

And so, in Week 13, having lost seven of their 11 games, with Deshaun Watson having served 11 of his 11-game suspension, and with the never-been-suspended Jacoby Brissett having become only the second quarterback in Browns history (the first was Colt McCoy in 2010) to beat Tom Brady, the National Football League’s most active quarterback consumers are going to change horses in midstream.

This, of course, was the plan all along. The Browns traded for Watson knowing he’d probably be suspended. But for a franchise for which desperation is a way of life, what’s another 11 games?

Having failed miserably at trying to draft a franchise quarterback themselves, Browns ownership decided to let another team find what the Browns were incapable of finding, and then pounce. Because money talks. Well, money and draft picks.

All it took was trading six draft picks, half of them first-round picks, a five-year, $230 million contract, enduring a self-inflicted public relations nightmare, and the patience to wait out the 11-game suspension the quarterback had to serve for, well, you know.

But that was it.

Why didn’t someone think of this sooner?

So here he comes, and here we go. The wonderfully-talented, spectacularly-athletic Deshaun Watson will make his long-awaited 2022 Cleveland Browns debut Sunday, in Houston, nearly nine months after the trade that brought him to Cleveland and three months after the start of the NFL season.

Wednesday is typically the day the Browns’ quarterback, one of the leaders of the team, speaks with the media and, through the media, to the fans. Watson chose not to speak.

Granted, Watson has a lot on his plate this week in order to get up to speed for his first start of the season, a season in which his team’s playoff hopes are barely flickering, even after Brissett’s bravura performance in the win over Tampa Bay.

He’s also being asked to ignore the nearly two years of rust encrusting his skill set, and to instantly resume being one of the NFL’s elite quarterbacks, which he was before, well, you know.

That’s a lot of baggage to carry into your first start of the season, but Watson arrived in Cleveland with even more baggage than that. If there’s one thing this guy knows, it’s baggage.

All of these factors will be in play when the Browns’ new quarterback, playing against his old team, tries to kick start his new team into a season-ending, playoffs-seeking cavalry charge.

In a lot of ways Watson, on Sunday, will be trying to jump onto a moving train. Physically and chronologically — he just turned 27 — he should be in the peak of his career. When his career was halted, he had been a Pro Bowl quarterback three years in a row. But is it reasonable to assume he’ll immediately become that Deshaun Watson the moment he steps on the field in Houston?

Or is it going to take a few games for Watson to recapture the rapture of his self-interrupted career? There again, the Browns don’t have time to wait. Their sluggish, disastrous first two-thirds of the season have put them behind the eight ball, even with the expected boost that should be provided by the addition of a Pro Bowl quarterback.

The cold hard facts are this: Watson is trying to restart his career. The Browns are trying to reach the playoffs. They may have to win all of their remaining games to do so, but that’s their fault.

Watson can’t be blamed for where the 4-7 Browns are now, but he can be the reason they get to where they want to go. It won’t be easy. As a team, Watson and his baggage aren’t very popular right now. He and it will have to live with that.

Commentary: Jacoby Brissett gets the send-off he deserves — a victory
Browns-Texans Preview: 3 things to watch, 3 key numbers, the prediction