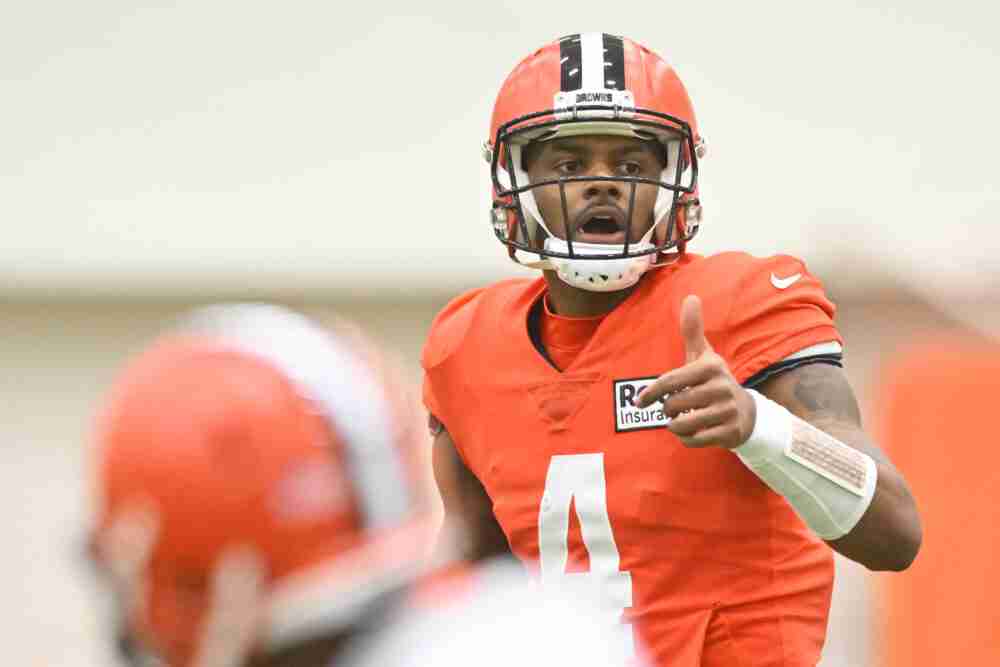 BEREA — Deshaun Watson was quick to express his excitement in being back from suspension. He thanked the Browns organization, ownership, coaches and teammates for their support during his time away. He gave gratitude to Browns fans and the city of Cleveland for “embracing him.”

He refused to discuss the serious accusations that led to the 11-game suspension or anything he’s learned from the mandated counseling he agreed to in his settlement with the NFL.

“I understand that you guys have a lot of questions, but with my legal team and my clinical team, there’s only football questions that I can really address at this time,” the Browns quarterback said Thursday during the opening statement of his first news conference since Aug. 18.


Watson, 27, was accused by more than two dozen women of sexual assault and misconduct during massage therapy sessions. Two Texas grand juries declined to indict him on criminal charges, and he settled 23 of 25 civil lawsuits.

An independent arbitrator found he violated the NFL’s personal conduct policy, and he settled with the NFL on Aug. 18, accepting the 11-game suspension, a $5 million fine and mandatory testing and counseling.

He’s repeatedly denied any wrongdoing, including ever assaulting, harassing or disrespecting a woman.

Watson was asked what he learned about himself during the suspension.

“I respect your question. I understand,” he said. “But that’s more in that phase of clinical and legal stuff and I’ve been advised to stay away from that and keep that personal.”

He also dismissed questions about telling his side of the story and fans who don’t think he should be the face of the franchise.

“I’m focusing on football,” he said.

Watson was defiant and “stood on my innocence” when he talked to reporters Aug. 18. People hoping for contrition Thursday were disappointed. Those who want the conversation shifted toward the field appreciated his approach.

“I also want to thank all the Cleveland fans in the city of Cleveland for embracing me, but also helping me adapt to the community. It’s been awesome. It’s been great being out to dinner and social places, being able to hang out with some of the fans and interact with them.”

Watson’s suspension started Aug. 30 and he was banned from the team’s facility. He returned Oct. 10 and was allowed to attend meetings. He returned to practice Nov. 16 and was officially reinstated Monday.

The first start Sunday will come in Houston against his former team. The Texans (1-9-1) drafted him with the No. 12 pick in 2017 — the selection was acquired in a trade with the Browns — and he went to three Pro Bowls in four seasons. He demanded a trade after the 2020 season and didn’t play last year.

He said he’s excited to play in front of Browns fans and some of the Texans fans and said he has “so much love” for the city of Houston. Tony Buzbee, attorney for all but one of the women who filed civil lawsuits against Watson, said he and about 10 of the accusers will be at the game to make the statement “we’re still here, we matter.” Watson was asked about the potentially hostile environment.

“I’m not worried about the atmosphere,” he said. “I have to go in and execute the game plan.”

“It was cool just to see him out there practicing,” receiver Amari Cooper said. “You could see it in his face that he was kind of excited to be out there, so it was pretty cool.

“You could just see the command that he had, in the huddle and the detail that he had, even in the meeting rooms, talking about the plays and stuff like that.”

The Browns are 4-7 and likely need to win their final six games to make the playoffs. Teammates have welcomed back Watson and are eager for his debut.

“He’s a good player. It gives you a boost,” All-Pro left guard Joel Bitonio said. “The season is a long season, it’s like 17 sprints, it’s not even a marathon, it’s a lot. So a new guy in there, it’s definitely brought a little bit of energy, but he hasn’t played football in a long time, either, so it’s going to be something where we feel each other out and hopefully come out with a bang.”

Most of Watson’s focus during his time away from the team was on the mental side of the game, staying “locked in” on Cleveland’s scheme and the defenses the Browns played. He also trained “constantly.”

He isn’t trying to carry the Browns to the postseason by himself.

“My biggest responsibility is just doing what the scheme allows me to do and that’s executing the game plan, getting the ball into the playmakers’ hands and just try to win,” Watson said. “We can’t focus on the next game. We can’t focus on two games, three games down the road. We have to worry about being 1-0 this week and focus on that.”

“We’ll have to see Sunday, honestly,” he said. “It might take time, it might not take time. I just wanna go out there and make plays as much as I possibly can.

“Two years is definitely a long time, but at the same time I’ve been doing this since I was 6 years old. So just like riding a bike, I want to go out there and just find the pedals, get my transition going and then just let everything kind of come to me. Don’t press it, don’t try to make anything bigger than what it really is.”

Watson is an extremely accurate passer — his 67.8 completion percentage is the highest in NFL history for someone with at least 1,500 attempts — with a strong arm to throw deep and speed to pick up yards on designed runs and scrambles. In 2020 he joined Peyton Manning, Patrick Mahomes and Drew Brees as the only quarterbacks with 5,200 total yards and a 110.0 passer rating in a season, and he has 1,677 yards and 17 touchdowns rushing in his career.

“I’ll just really try to make as many plays as I can,” he said. “If that’s with my feet or my arm, if that’s handing the ball off to 24 (Nick Chubb) or 27 (Kareem Hunt), whatever I need to do for this offense to continue to do what they’ve been doing. I have to hold up that standard and do everything I can, not try to do anything special.”

The transition from Brissett to Watson was made easier by Brissett’s devotion to putting the team first.

“I also want to thank most importantly Jacoby, the big brother he’s been to me and everyone in that locker room,” Watson said. “The passion, the grit, the leadership he has shown these past weeks, everyone has seen it. He’s the ultimate guy that everyone wants to follow.

“So he’s been awesome for me. Our relationship has been great. The bond has been great and we’re gonna continue to grow from there and help win some more football games for the Cleveland Browns.”

Teammates ‘been waiting a long time’ for Deshaun Watson’s return to starting role
A matter of rust: How much will long layoff affect Deshaun Watson?