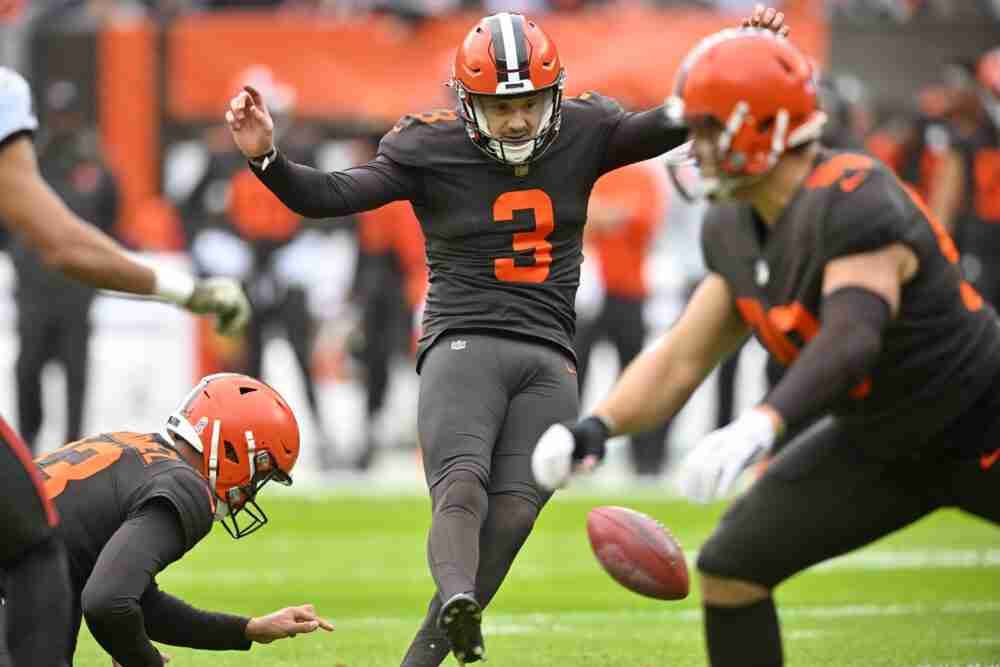 York, a fourth-round pick, badly missed a 39-yard field goal wide left Sunday in the 23-17 overtime win over the Buccaneers. He’s 17-for-23 on field goals, including three blocks, and 24-for-26 on extra points.


“He just did not hit the ball well on that one,” Priefer said of the 39-yarder. “The thing about Cade is obviously I was extremely proud of the way he hit that 51-yarder — that was a big kick — made an early PAT, missed the 39-yarder and then, quite frankly, he stepped up and really drilled the PAT to tie the game at the end.

“I was extremely proud of the way he reacted. That is hard for a young kicker. It is hard for any kicker, especially a young kicker after missing a field goal he knows he should have made. We went into overtime because of that kick and ended up winning the game. He kicked off well. He has to obviously eliminate those mistakes going forward, especially a 39-yarder, but he knows that and he is continually working on that.”

Priefer blamed the three blocks on low kicks, saying the protection, snap and hold were good. He said punter Corey Bojorquez has been good  as the holder.

“Corey has really worked extremely hard since he got here,” Priefer said. “I know that was one of the criticisms he had leaving Green Bay was he wasn’t a great holder. He has developed into I think a very, very good holder, and he is only going to get better.

“He has got a great mentality and great temperament to be a holder. He does not panic. Even if one might be a little bit off, he will get it down. For us, it is the snap, the spot, the tilt and laces in that order. He has worked really hard being quick and smooth.”

Tight end David Njoku (knee) missed practice for the second straight day and wasn’t on the field during the portion open to reporters.

** Cornerback Denzel Ward didn’t practice, working on the side. He was limited Wednesday with an ankle injury and hurt the hamstring.

The suspect in the vandalization of the FirstEnergy Stadium field has been identified, a spokeswoman for the Cleveland Police Department told The Chronicle-Telegram in an email.

Anthony Robert Westley O’Neal, a 21-year-old man, hasn’t been arrested but will be a direct indictment to the Cuyahoga County Grand Jury, the police said.

The Browns said someone broke into the stadium Nov. 22 and turfed the field in a vehicle. Two large double rings were visible Sunday on the west end of the field but were considered superficial.

Receiver Amari Cooper was surprised when Njoku handed him the ball after Njoku’s fantastic tying touchdown catch vs. the Buccaneers.

“I would think he would have wanted to keep that. I was kind of confused why he was handing it to me,” Cooper said. “I was like, ‘What do you want me to do with it?’ And he was like, ‘Spike it.’ So I just …”

Cooper obliged, which was a departure, because Cooper usually flips the ball to the official and heads back to the bench.

“I think that was my first time spiking the ball,” he said. “I really didn’t know what to do with it, I ain’t going to lie to you.

“Probably won’t do it again.”

Njoku likes to celebrate touchdowns with his “Chief Slam” and may have been expecting Cooper to do that.

Sione Takitaki has 15 tackles in the last two games, the first starts of his NFL career at middle linebacker. He replaced Deion Jones, who was starting after Anthony Walker Jr. (quadriceps) and Jacob Phillips (pectoral) suffered season-ending injuries.

“Now I’ve been two weeks, a lot of improvement,” Takitaki said. “I definitely need a lot of work but excited for the challenge and we’ll build on it.”

Takitaki played on the strong side for the first three-plus years of his career because the Browns liked how he fit there and had someone at middle linebacker.

“As you can see, he is capable of playing multiple positions, and it is a benefit for us,” coordinator Joe Woods said. “Sione is a take-charge type of guy. Our middle linebacker is the quarterback of the defense. Just to have him standing in front of the huddle and be the centerpiece of our defense is good. I think it gives guys confidence.”