A matter of rust: How much will long layoff affect Deshaun Watson? 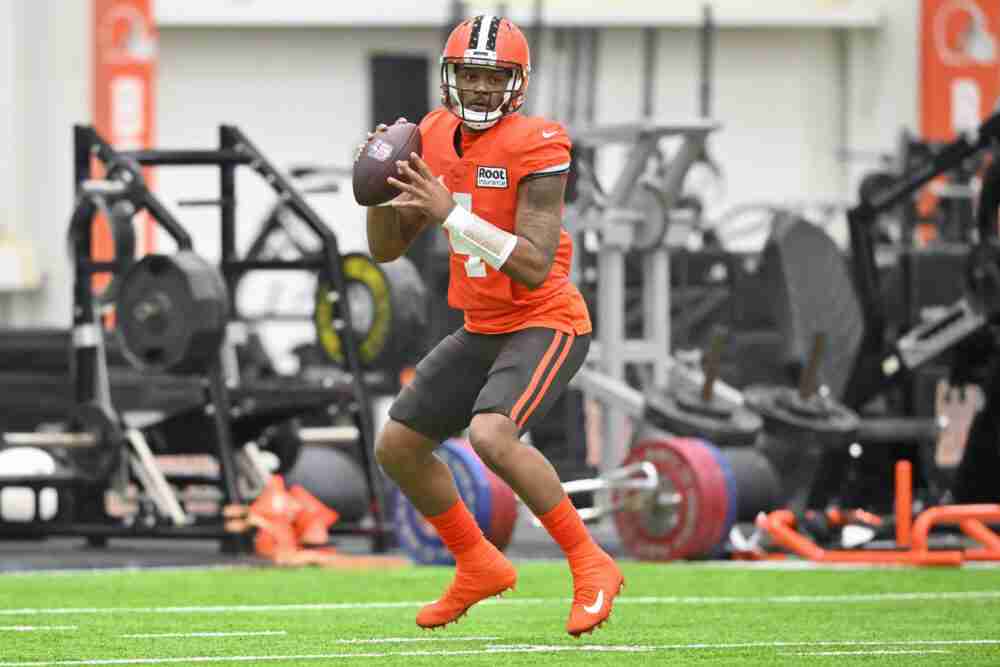 BEREA — Deshaun Watson’s stat line the last time he played was superb: 28 completions (72 percent), 365 yards, three touchdowns, an interception and a 115.9 passer rating. And his team scored 38 points in a three-point loss.

The performance capped a third straight Pro Bowl season and gave him the NFL passing title with 4,823 yards.

The date of the game — Jan. 3, 2021 — is as important as the numbers as Watson prepares to start Sunday in Houston against the Texans in his Browns debut. When Watson takes the field to face his former team following an 11-game suspension, it will be 700 days since his last start.


“Going back to playing quarterback after two years is tough,” cornerback Greg Newsome II said Friday. “Obviously he’s been working out and things like that, but it’s so much different getting out there and actually getting those live reps. But I applaud him, I salute him and we’re going to be right behind him the whole, entire way.”

Watson’s regular-season return has as many layers as a piece of baklava. The long layoff is a big one.

He didn’t play last year after demanding a trade from the Texans and then being accused of sexual misconduct during massage therapy sessions by more than two dozen women. The Browns traded for him in March, and he agreed to the suspension in August.

“I would assume there will be rust,” coordinator Alex Van Pelt said. “It is common in anybody who has not played in a long time no matter what position. There will be some rust to knock off. It is football, which he has done his whole life, so hopefully he knocks it off quickly.”

Defensive end Jadeveon Clowney played with Watson in Houston and re-signed with the Browns because of him. He’s confident Watson won’t have too much trouble picking up where he left off.

“He still can sling it. He’s accurate with the ball out there at practice,” Clowney said. “That’s all you can look for and hope it will roll over.

“I know he’s a little nervous I bet. It’s been two years. But I feel like he’ll go out there and do his thing and what he’d been doing. He’s all right.”

Watson’s other layoff in the NFL came after his anterior cruciate ligament tore as a rookie in 2017. He waited about 10 months before the opener the next year and struggled, but that was before he found his footing in the NFL.

He hopes this return is like “riding a bike.”

“My biggest focus is just going out there and whatever Kevin calls, making sure I execute it and take it one play at a time and let the game come to me, not press or anything like that,” he said Thursday, referring to coach and play caller Kevin Stefanski.

Watson was banned from the team facility at the beginning of his suspension, which started Aug. 30. He returned Oct. 10 and attended meetings and began practicing Nov. 16. The acclimation ramped up this week when he rejoined the first team.

“He’s getting a lot of the reps and trying to get extra reps with some of the guys that just build that trust and build that feeling where he knows how guys are coming in and out of breaks and where they’re gonna be in the route,” quarterbacks coach Drew Petzing said. “I think the more he can do that and has done that, I think it’s gonna help knock some of that off. Certainly trying to push that over these last couple weeks has been big.”

“You’ve just got to trust in your preparation, trust in what you do in the meeting room, individual period, all the practice reps you get, I think that’s really where you have to keep your focus,” Stefanski said.

Watson’s only game action since the end of the 2020 season came in the preseason opener against the Jaguars. He struggled but downplayed the significance of the appearance.

“Our biggest plan for that three series was just operational,” Watson said. “Hearing Kevin in the headset, being able to adapt to how he’s calling plays, how different personnel groupings are coming in. That was our biggest thing.

“It’s still preseason. We were still trying to figure out who we are as an offense.”

Stefanski isn’t worried about Watson going so long without being hit.

“He’s played a lot of football in his life,” Stefanski said. “It’s part of the game. I don’t think it’s something that concerns him per se. I think he’s got his job to do.”

Watson said he stayed mentally “locked in” during his time away from the team. He studied Cleveland’s offensive scheme, how defenses attacked the Browns and quarterbacks around the league.

“Definitely was impressed with where he was mentally when he came back,” Petzing said. “Felt like even though we weren’t working with him and he wasn’t getting the stuff day-to-day in the meeting rooms that he still took a step and that he was doing a lot of work on his own to make sure that when he jumped back in it was gonna be as smooth a transition as possible.”

Jacoby Brissett started the first 11 games, going 4-7, so Watson has tried to keep things similar with the cadence at the line of scrimmage and how the offense studies film. Watson raved about the influence of Brissett.

“It was a great opportunity to watch someone operate the way Jacoby operates,” Petzing said. “And Jacoby did such a great job of embracing the role and taking that leadership role. Deshaun came into this league as a starter, so he’s really never watched someone do that and saw it done from a guy who’s been in the league and been around some guys who have done it at a really high level.”

The consensus was the transition to Watson went smoothly throughout the practice week.

“He’s extremely talented and he’s looked great so far in practice and everything, so I think it’s just about getting out there and just playing and we’re all confident he’s going to go out there and play really well,” said tight end Harrison Bryant, who will start in place of the injured David Njoku.

No one knows exactly what to expect, but the anticipation is real.

“Last time I saw him, he was electric,” defensive end Myles Garrett said. “We’ve all been a part of it or seen it in some way, shape or form. He’s very talented and there is a little bit of an excitement building.

“I’m sure there will be a little bit of taking it slow, trying to get those short throws, easy throws in and getting his confidence up or those runs. And then once he feels warm and feels like he can make those bigger throws, I think his confidence will come back pretty quickly and he’s going to start airing it out.”