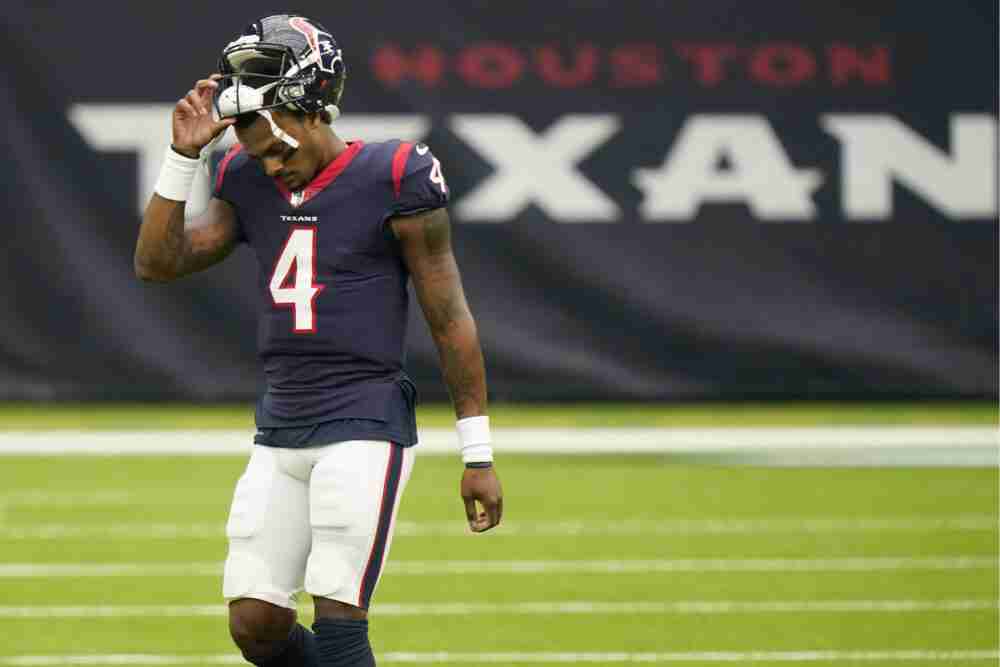 Deshaun Watson’s return to the NFL could’ve come in any of 10 cities — Cleveland or the sites of the Browns’ nine road games this season.

Houston as the setting for the quarterback’s comeback from a year off and an 11-game suspension adds context, intrigue and drama to a matchup that would otherwise be lost in the NFL schedule.

Watson was the No. 12 selection of the Texans in 2017 — the pick was traded to them by the Browns — and made the Pro Bowl three times in the four seasons he played. He sat out 2020 after demanding a trade months after signing a lucrative contract extension and amid the sexual misconduct scandal that tarnished his reputation and resulted in the suspension.


Not only was the Houston area Watson’s home — he still has one there — it was the location for many of the sexual assault and misconduct accusations and the two grand juries that declined to indict him on criminal charges. Watson settled 23 of 25 civil lawsuits, and the Texans settled 30 civil lawsuits after being accused of enabling Watson’s behavior.

This isn’t the normal player-faces-former-team tale.

“This will probably be the final piece to that story,” Texans coach Lovie Smith told reporters. “Deshaun is back. He’s playing football. The way things go, his first game would be back down here.

“A lot of people will be watching this game, and hopefully we put our best effort we’ve had all year.”

Watson said returning to face the Texans wasn’t a factor in the suspension settlement with the NFL, he just wanted to make sure he’d play this year. He’s happy how things worked out.

“I’m excited to just play football in general in front of Cleveland Browns fans, but also in front of some of the Houston Texans fans,” he said Thursday. “I respect the whole organization of the Houston Texans. I respect the McNair family. I respect everyone that was there that drafted me in 2017. There’s been great memories, fun memories. I still have friends and family that’s still in Houston and relationships are still there.

“I’m excited to get in front of all those fans. I have so much love for the city of Houston and H-Town and everyone in that city pretty much knows that. But the most important thing is I’m excited to be in front of the Cleveland Browns fans for sure.”

A matter of rust: How much will long layoff affect Deshaun Watson?

Watson didn’t leave the Texans on good terms, so a hostile reception is expected. That includes about 10 of his accusers attending the game, according to lawyer Tony Buzbee.

“I’m focusing on just being the starting quarterback and executing the game plan,” Watson said. “I’m not worried about the atmosphere.”

The Texans are 1-9-1, so a level of apathy has set in, but many fans want to see them take down Watson.

“I’m pretty sure they do,” Texans right tackle Tytus Howard said. “We all see and hear what everybody says.”

The Browns, 4-7 and with playoff hopes hanging by a thread, are trying to not get distracted by everything surrounding the action on the field. In the preseason opener in Jacksonville, Watson was greeted with boos and profane chants.

“We’re treating it like a normal road game,” left guard Joel Bitonio said. “We’re expecting it to be loud and we’re expecting to hear some boos and stuff like that.”

“We’re going down there to play a game, so we’ll be locked in, we’ll be in the hotel, we’ll be just going straight to the game,” No. 3 quarterback Kellen Mond said. “So a lot of the chatter will probably go right over our heads.”

It remains to be seen how Watson will do after not having played in 700 days. Just as uncertain is how he’ll handle the mental side of his first game since Jan. 3, 2021.

“It’s not necessarily burying the emotions, it’s being aware of them and understanding that they’re gonna be there,” quarterbacks coach Drew Petzing said. “So you need to be ready for them and if you haven’t put any thought into them, they can catch you by surprise. But if you’ve processed them and say, ‘Hey, I know my adrenaline’s gonna be rolling, I’m gonna feel pretty good.’ and see how that affects you at practice, see how that affects you in the Jacksonville game so that it doesn’t catch you by surprise the first play of the game in Houston is gonna be important.

“I think he’s done a really nice job of being aware of that and having those conversations and being ready for that.”

After all the off-field issues and conversation since Watson was acquired in a trade, the Browns can’t wait for his regular-season debut. They’re hoping for a jolt of energy and a boost in performance as they try to build on last week’s overtime win over Tampa Bay and sweep the final six games to reach the postseason.

“The last year I played with him he played well for us,” said defensive end Jadeveon Clowney, who was Watson’s teammate in Houston in 2017 and ’18. “He was in a great situation winning football games, I would just hope he can come back and do the same thing here. We still got a chance and that’s all you can ask for in this situation.”

The Texans prepared for Watson to play at a high level despite the long layoff.

“When he was playing he was one of the elite quarterbacks. We’ve got to expect him to play a good game,” said linebacker Christian Kirksey, a former Browns draft pick.

“He hasn’t played in a long period of time, but he’s a heckuva football player. I know that,” Smith said.

“Changed area codes and all that,” Smith said. “Now it’s just about a great quarterback coming into town that we need to get ready for with a history with our franchise.

“Did I tell you we’ve got a lot of young guys? They don’t know a whole lot about our past and what we’ve done.”

Howard has plenty of familiarity with Watson.

“He was a great quarterback, great teammate, great guy,” he said. “I enjoyed the time he was here. But he’s not here no more.”

He will be Sunday.