Analysis: Rusty Deshaun Watson must improve in hurry, other takeaways from win over Texans 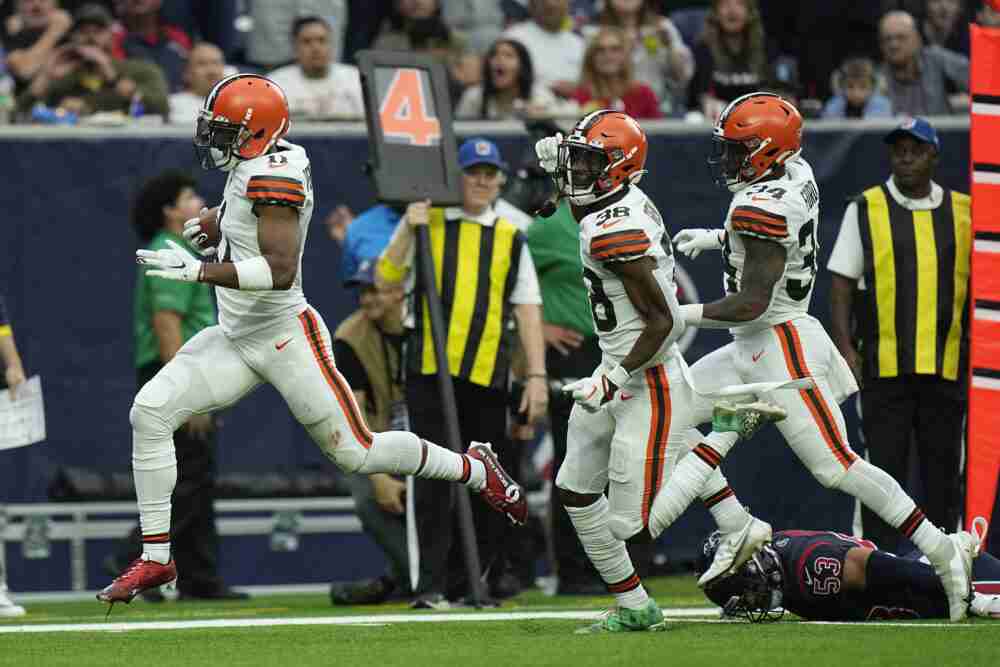 I didn’t know exactly what to expect in Deshaun Watson’s first game in 700 days.

What transpired Sunday in Houston didn’t make my list of possibilities.

The Browns prevailed 27-14 for their first two-game winning streak of the season. They improved to 5-7 and stayed on the fringe of the playoff chase.


That was predictable against the Texans, the worst team in the NFL who fell to 1-10-1.

What I didn’t see coming was just how poorly Watson would play coming off an 11-game suspension after being accused by more than two dozen women of sexual misconduct during massage therapy sessions. Or how the Browns would score almost all of their points.

Here are three takeaways from the necessary victory and Watson’s debut with the Browns:

After watching Watson zip the ball during the early portions of practice, listening to his teammates talk about how good he looked and studying the Texans’ lowly ranked defense, I thought Watson would have a degree of success.

He went 12-for-22 (54.5 percent) for 131 yards, an interception and a career-low 53.4 passer rating against his former team. He bounced throws, didn’t see the field well, including on the interception into the end zone, and looked uncomfortable under pressure.

The fact Watson hadn’t played in the regular season in 700 days — Jan. 3, 2021 — was well-publicized since the terms of his suspension settlement with the NFL were revealed Aug. 18. Yet he acted like he hadn’t heard that number until walking off the field.

“I guess it’s 700-plus days since I’ve played, so it’s not going to be perfect, especially playing in December football where guys are Week 14, Week 13, this is Week 1 for me,” he told reporters in Houston. “I just say I felt every single one of those 700 days.”

Watson mentioned he wasn’t used to facing a live pass rush with defenders who could hit him, and that the Texans defense did a good job switching coverages, keeping him off-balance and restricting him to the pocket.

“He’s gonna learn from every rep,” said Kevin Stefanski, whose 25th win in three seasons broke a tie with Butch Davis and Romeo Crennel for most by a Browns coach since 1999. “You gotta get back in it. You gotta get these game reps, gotta get this first one out of the way. But I know what the kid’s capable of.”

The severity of Watson’s struggles might’ve been shocking, but defensive end Myles Garrett took them in stride.

“We’re not going to hold him to a crazy standard and expect him to be Superman out there,” he said. “He hasn’t played in two years. We know the kind of football player he’s been in the past and what he’s like.”

HE BETTER GET BETTER … FAST

The Browns don’t have time to wait for Watson to start playing like the three-time Pro Bowler he is. They likely need to win their final five games for any shot at the postseason, and travel to Cincinnati next week to face an 8-4 Bengals team that knocked off the Chiefs on Sunday.

“Just trying to continue and improve each and every day, that’s my goal and just try to get into that rhythm as much as possible,” Watson said. “We’ve got a big one next week and I’m just happy to be 1-0.

The Browns knew what they were getting into when they traded a net of five draft picks, including three first-rounders, to the Texans on March 18. Watson was traveling with an immense amount of baggage, didn’t play in 2021 and was destined for a suspension.

Jacoby Brissett performed admirably in Watson’s absence, but the Browns managed only a 4-7 record. Committed to handing the reins to Watson upon his reinstatement — Stefanski said after the game he’s sticking with Watson — the Browns didn’t leave themselves any margin for error.

“I said to the guys, it’s not win or go home. There’s no option. There’s no alternative. It’s just win,” Garrett said. “That’s all we can do. We can’t leave without it.”

They’ll need Watson to play like his former self, or at least as well as Brissett on a good day, to have a shot at upsetting the Bengals.

The defense and special teams killed the Browns for much of the season, robbing the team and Brissett of a better record.

“That’s the kind of complementary football we’ve been looking for, and that’s something to build off of in these two phases of the game,” Garrett said.

If the Browns are going to mount a serious late-season charge, they’ll need Watson to find his form and the rest of the team to keep supporting him.

Commentary: NFL did Browns huge favor by giving them terrible Texans in Deshaun Watson’s first game
Commentary: If only Baker Mayfield, Deshaun Watson and the Haslams had never found each other