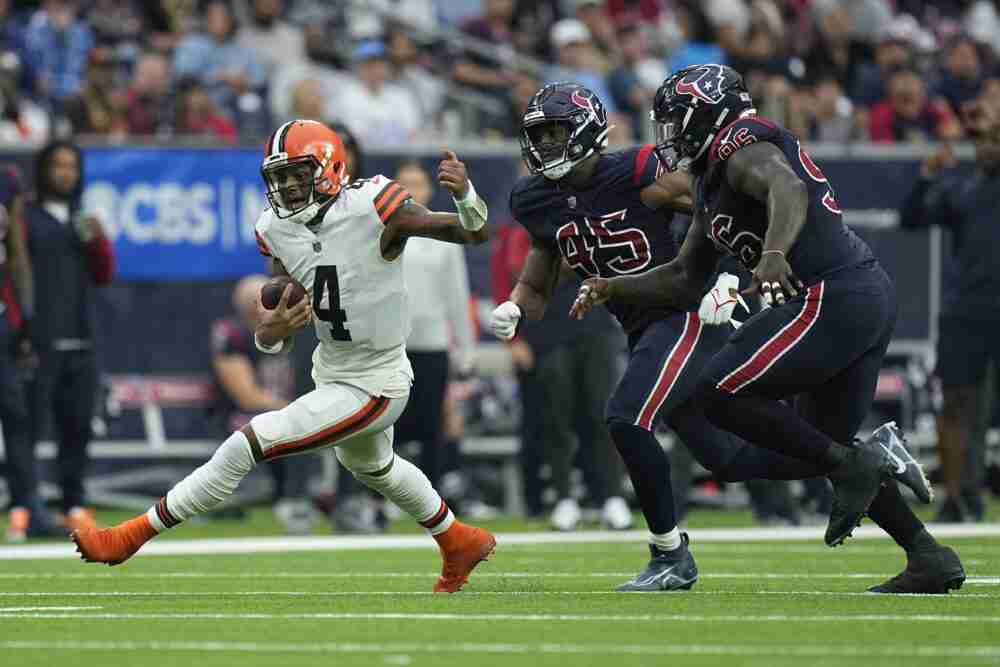 Cleveland’s defense and special teams ensured the Browns got the win despite his struggles.


Watson turned in a sloppy performance in his first game in 700 days, but a punt return for a touchdown by Donovan Peoples-Jones and two defensive TDs were plenty enough to give the Browns a 27-14 victory over the lowly Houston Texans.

In the same stadium where he played his previous game, a rusty Watson threw for 131 yards with an interception in his debut for the Browns (5-7) against his former team in his return after serving an 11-game NFL suspension for sexual misconduct allegations.

“It’s not going to be perfect, especially playing December football and it’s Week 1 for me,” Watson said. “It was fun, though. It was awesome to be out there with my teammates. The defense played a heck of a game. Special teams return was big for us. That’s what we needed at the time. It’s a team sport.”

Plenty of fans attended the game wearing Watson’s No. 4 jersey from both the Texans (1-10-1) and the Browns, but there were also detractors, with loud boos raining down on him every time he touched the ball.

The Browns trailed 5-0 early, but a 76-yard punt return by Peoples-Jones put them on top in the second quarter and Denzel Ward’s 4-yard fumble return for a score pushed the lead to 14-5 early in the third quarter.

“He’s human,” Cleveland coach Kevin Stefanski said of Watson. “Coming back here, first game in awhile, his teammates had his back.”

Cleveland didn’t score on offense until a 43-yard field goal made it 17-8 with about 10 minutes remaining. The Browns added a second defensive score when Tony Fields II intercepted Kyle Allen and returned it 16 yards on the next play. It’s the first time in franchise history that the Browns had three non-offensive touchdowns in a game.

“I think our defense played well throughout, (but) their defense outplayed our defense today,” Houston coach Lovie Smith said.

Allen had a terrible day in his second start since Davis Mills was benched. He threw for 201 yards with a fumble that was returned for a touchdown and two interceptions, the second of which was returned for a score, as Houston’s skid stretched to seven games.

“Offensively you can’t win many games playing like that,” Smith said. “I’m just disappointed in how we played offensively.”

Soon after that, he became unhappy with the direction of the team and requested a trade. Then more than two dozen women accused him of sexual harassment or assault during massage therapy sessions.

He remained on Houston’s roster last year but sat out all season before being traded to the Browns in March.

Watson agreed to the lengthy suspension, a $5 million fine and had to undergo professional counseling and therapy after an independent arbitrator ruled that he violated the league’s personal conduct policy.

Watson was 12-for-22 and finished with a 53.4 passer rating, which was the lowest of a career in which he took the Texans to the playoffs in two of the four seasons he played for them.

His first completion was on his third throw on a short pass to Anthony Schwartz. But Tavierre Thomas stripped the ball and Desmond King recovered it to give Houston the ball on the Cleveland 38.

The Texans had a first down at the 16, but a face mask penalty followed by a false start pushed them back 20 yards and they settled for a 44-yard field goal four plays later to make it 3-0.

Nick Chubb had 80 yards rushing for the Browns and Kareem Hunt added 56 yards.

Watson was picked off in the end zone by rookie Jalen Pitre with about 3½ minutes left in the first quarter. Pitre returned it 29 yards.

“There’s some good things that we can build on, but overall we just got to make more plays,” Pitre said.

The Texans got down to the 1, but Allen threw an incomplete pass on fourth-and-1 to give the Browns the ball back. Three plays later Roy Lopez tackled Chubb in the end zone to make it 5-0.

Peoples-Jones put the Browns on top when he returned a punt 76 yards for a touchdown to make it 7-5 with about four minutes left in the second.

He evaded four tackles at the start of the return and then simply outran everyone the rest of the way for Cleveland’s first punt return for a score since Travis Benjamin had a 78-yard return on Sept 20, 2015.

The Texans looked to have returned a fumble by Watson for a touchdown with less than a minute left in the first half. But officials ruled that it was an incomplete pass.

The Browns extended the lead to 14-5 when Ward scooped up a fumble by Allen and returned it 4 yards for a touchdown with about 10 minutes left in the third quarter.

Cleveland became the 11th team since the merger to have three or more touchdowns combined on defense and special teams without a TD on offense and the first since the Eagles did it in a 26-21 loss to San Francisco on Sept. 28, 2014.

Allen was intercepted on the first play of the game when John Johnson III grabbed a pass that was deflected by Teagan Quitoriano. The play was first ruled an incomplete pass, but the Browns challenged it, and it was reversed.

Browns rookie WR David Bell injured his hand in the first quarter. … Schwartz left in the third quarter to be evaluated for a head injury. … MLB Sione Takitaki injured his knee in the fourth quarter. … TE David Njoku missed his third game in five weeks with a knee injury. … Texans RB Troy Hairston injured his ribs in the second quarter. … RB Rex Burkhead missed the game with a concussion. … WR Brandin Cooks sat out with a calf injury.

Browns: Visit the Bengals next Sunday.