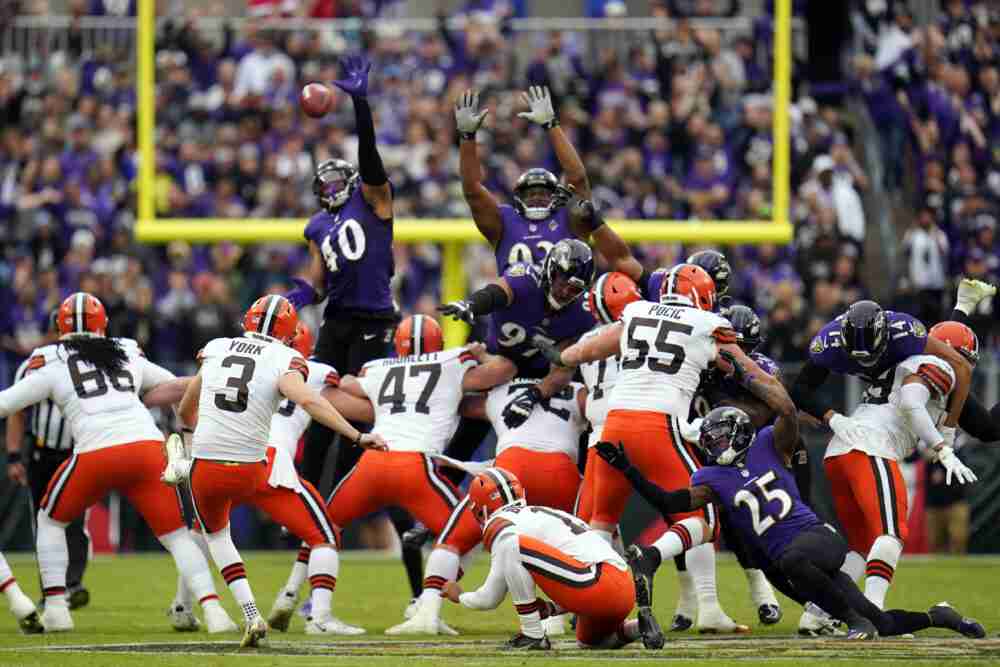 The date and time had been to be determined since the schedule was released in the spring, and the NFL finally set the weekend’s games Monday afternoon.

Sione Takitaki out for rest of season with torn ACL

The Browns-Ravens matchup will be important for the Ravens (8-4) in the AFC North race and the AFC playoff picture. It could also be critical for the Browns (5-7) if they can upset the Bengals (8-4) on Sunday in Cincinnati.


The Browns, who’ve won two straight, likely need to run the streak to seven to finish the regular season to have a chance at making the postseason.

Analysis: Rusty Deshaun Watson must improve in hurry, other takeaways from win over Texans

The game will be the second in a Saturday tripleheader broadcast by NFL Network. The Browns game will be shown locally on WEWS (News 5).

The Colts visit the Vikings at 1 p.m., and the Dolphins travel to the Bills at 8:15.

The Giants at Commanders was flexed to Sunday night.

The No. 3 receiver spot suffered a couple of losses against the Texans.

Anthony Schwartz, who didn’t play much following an early lost fumble after a catch, sustained a concussion and is in the protocol.

Demetric Felton Jr. took over as the third receiver, was targeted once and didn’t have a catch.

He played 38 of 63 offensive snaps, by far his most playing time of the season. He played 23 offensive snaps over the first two games and hadn’t played on offense since. He was a healthy scratch six times.

If Bell can’t play vs. the Bengals, rookie Michael Woods II could be an option besides Felton. Woods has two catches in five games.

** Third safety Ronnie Harrison Jr. was evaluated Sunday and Monday morning for a concussion and cleared.

Tight end Harrison Bryant got the first rushing attempt of his three-year career. He took a jet sweep 8 yards to pick up a first down on third-and-1.

“It was kinda exciting,” said Bryant, who filled in for the injured David Njoku (knee).

Bryant took the handoff from backup quarterback Jacoby Brissett, who replaced Deshaun Watson for the one snap. Brissett has had a lot of success on short-yardage sneaks, and Bryant said the ball wasn’t necessarily intended to go to him.

“It could’ve been something else, but we switched to it because of the defensive look,” he said.

“Those help you win ballgames,” Stefanski said. “They seem to come in bunches, so we are always looking for multiple games where we can get multiple takeaways because it does really change the complexion of these games.”

** Quarterback Joshua Dobbs signed to the Lions practice squad. He spent the first 11 games as Cleveland’s backup, didn’t play and was expendable after the return of Watson from suspension.