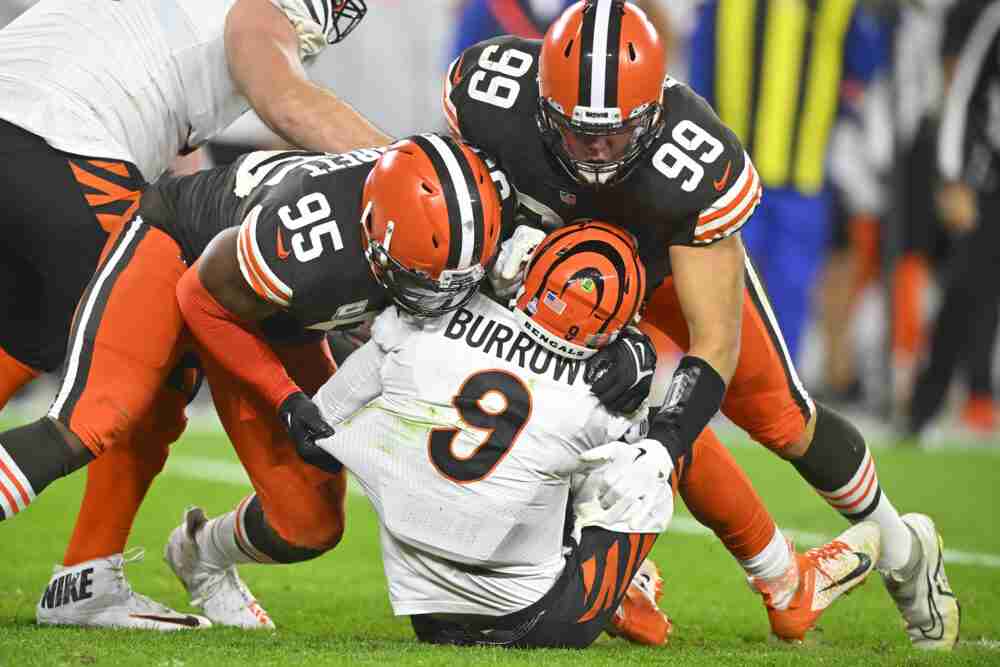 Q: Scott, can the Browns legitimately hope to beat the Bengals when they get NO pressure up the middle from their DTs?

A: It’s a fair question, and I’m not defending the defensive tackles. But my answer is yes, based solely on the impact end Myles Garrett has had against the Bengals. I understand most of that came with better tackles on the Browns line, but he still had 1.5 sacks, four quarterback hits and a pass defensed that led to an interception in the 32-13 win Oct. 31.

I found it interesting this week when defensive line coach Chris Kiffin and Garrett said the Bengals double-team him less than most teams. Garrett said the Bengals give right tackle La’el Collins more help than they do left tackle Jonah Williams. The Bengals have lost five straight to the Browns, so I could see one of the changes they make this week is consistently double-teaming Garrett to make sure he doesn’t wreck the game. If that happens, your point becomes incredibly relevant. End Jadeveon Clowney and tackles Jordan Elliott, Taven Bryan and Perrion Winfrey would have to take advantage of their one-on-one matchups.


Cade York wants to get off roller coaster, stay consistent for rest of season

Q:
Many Browns fans believe any rookie QB drafted in 2018 would have failed in Cleveland, including Josh Allen or Lamar Jackson. Is there a little truth in that, and if so, couldn’t a veteran fail, too? What is to prevent the Factory of Sadness from chewing up Deshaun Watson?

A: I don’t agree with that notion. I do believe there was some truth to that during the darkest days of the Browns’ return but not since 2018. Baker Mayfield played well as a rookie and led the team to the playoffs in 2020, so I have no reason to believe Allen or Jackson wouldn’t have had similar success to what they’re having with their teams. That’s especially true since coach Kevin Stefanski took over in 2020 and added stability and sanity.

As for Watson, I’m just not a believer in the Factory of Sadness curse. It didn’t keep Joe Thomas, Joel Bitonio or Myles Garrett from playing well, so I don’t think there’s something special about quarterbacks being doomed. If Watson is going to fail with the Browns, which I don’t expect to happen, I think it would be because he can’t get past the sexual misconduct allegations and the fallout. Or he doesn’t stay healthy.

Q: As a precursor to my question, I was not a fan of the Watson signing. The Browns posted a video of Donovan Peoples-Jones’ punt return. It’s always fun to hear and see Jim Donovan get so excited! The team mobbed him in the end zone, including Jacoby Brissett. And they enthusiastically congratulated him on the sidelines. All except Watson, who offered a lackluster handshake with barely any eye contact. Leadership is demonstrated in many ways. From the locker room, is he a leader or is it just clear to the team that his contract has anointed him as one. It’s only been one game, but my personal patience is short and his performance in Game 1 was underwhelming.

A: Good to hear from you.

I didn’t notice that about the celebration after Peoples-Jones’ touchdown, but I think Watson is a legitimate leader. The trip to the Bahamas may have been an overt attempt to buy affection but it worked. And from watching his interactions in the locker room, he talks to several players and has long conversations, including with Peoples-Jones, whose locker is close.

I do think Watson was and will be forced to be an even better leader because of how respected and beloved Jacoby Brissett became during his time as starter.

Q: Everyone has their views about Watson. Why do all the media knuckleheads keep asking Watson questions he has said he won’t answer. And please don’t tell me it’s your job.

A: I don’t call you a knucklehead to your face.

First of all, nobody asked Watson anything but football questions this week. The few non-football questions he got before the Texans game were because his off-the-field actions are a huge part of his story, whether he wants to discuss it or not. He has the right to say he won’t answer, just like we have the responsibility in certain situations — especially for his return after nearly two years and in his first interview in more than three months — to ask about one of the biggest stories in the NFL this year.

Almost. Last week against the Texans, Winfrey played 37 snaps to Elliott’s 38. The week before, it was 23 for Winfrey and 34 for Elliott.

It was really interesting how Kiffin said multiple times Friday that Winfrey needs to put in a “full week” to contribute during games. The coaches are obviously trying to get through to him as he battles immaturity.