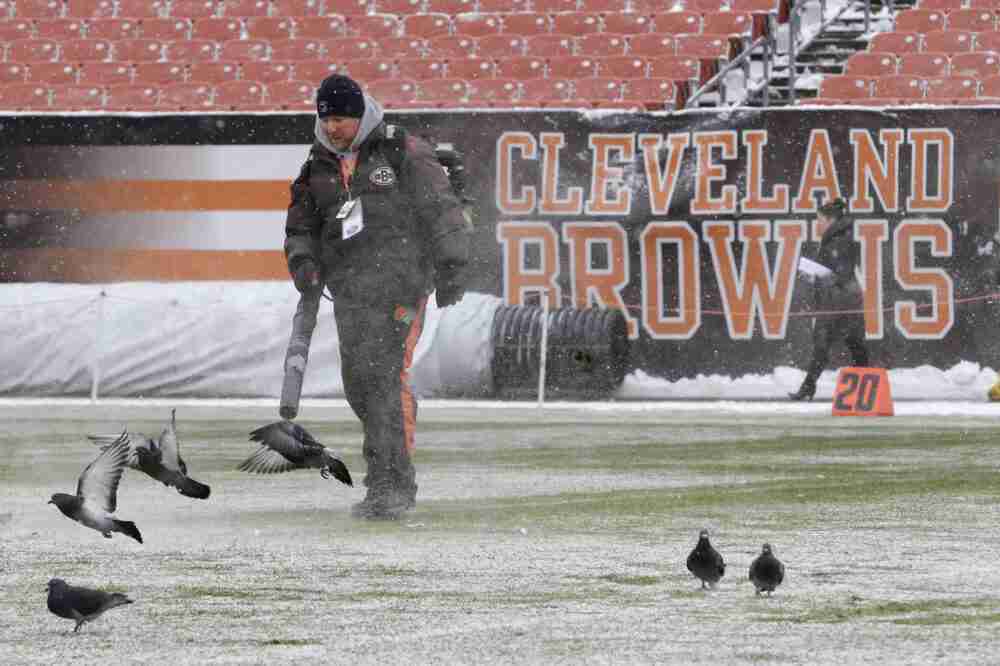 In a home season of blown coverages, blown chances for victories, a blowout win and a blowout loss, perhaps it’s fitting the FirstEnergy Stadium schedule will conclude Saturday with an appearance by a bomb cyclone.

The Browns (6-8) will finish the season with games at Washington and Pittsburgh, so the visit from the Saints will be a goodbye to the fans — those willing to subject themselves to 25 mph winds, gusts up to 46 mph and wind chills that could dip to negative-24 degrees, according to the National Weather Service.

“This is the great part of our league is you have games that you get to play in different conditions,” coach Kevin Stefanski said. “The truth of the matter is the conditions will be the exact same for both teams, so it will be about who executes and who does their job.”

The players took different approaches to the forecast — tight end David Njoku will go shirtless in warmups and running back Nick Chubb and at least part of the offensive line will go sleeveless during the game, while others will wear as many clothes as possible without restricting movement. They were all focused on getting their minds right.

“It’s just football at the end of the day,” receiver Amari Cooper said. “Play in whatever conditions that come that day. Just gotta go out there and just ball, play football. The weather, it’s a non-factor really.”

Jack Conklin agrees to 4-year, $60M contract extension, well on way to finishing career in Cleveland like he wants

The Browns need a win to keep their microscopic playoff chances from slipping out of their frozen fingers. A victory would also make them 5-3 on the lakefront, marking the third straight home season above .500 for the first time since 1985-89. Coach Kevin Stefanski is 16-8 in three seasons at First Energy Stadium.

“We find a way to go out there and get a win, that’d be a good sendoff,” cornerback Denzel Ward said.

Consistent Amari Cooper’s made grand impression in first season with Browns, believes best is yet to come

By the end of the week Stefanski was tired of talking about the weather, but it’s the biggest storyline in an interconference matchup of below-.500 teams that can’t afford a loss in their hopes of staying on the outskirts of playoff contention. It remains to be seen how the weather will affect play calling and performance, but Stefanski and his staff were ready to be flexible.

“We are fortunate to get to play in it being from up here and facing a team from the South,” offensive coordinator Alex Van Pelt said. “We like that. If it is one of those days that you can’t even take a shotgun snap because the wind is blowing too hard, we will adjust and adapt. I think we have a good plan going in and contingency plans if it is one of those days where you just can’t really do anything but get under center and run the ball.

“If we get lucky and it is not as windy as they are calling for, we are ready for that. A lot of energy in the stands when it gets cold like that, so it should be a fun day.”

The advantage over the Saints (5-9) seems real.

The coldest game in their franchise history was a starting temperature of 24 degrees in Philadelphia in 1993, and the high Saturday is expected to be 11 degrees. They play in a dome in a warm climate and are 0-6 outdoors and 0-4 on grass this year.

“I like the elements. It adds a little difference,” left guard Joel Bitonio said. “When you’re playing in a dome with 68 or 70 every time, it’s perfect conditions and I feel like football’s an imperfect game. I know there’s some people that want the high-powered offense, you want to see the talent play, but sometimes it’s cool to have a little snow. You’re out there just playing football and it just reminds me of things you think about when you’re a kid.”

“I just feel like it’s like a decision you gotta make. Are you going to let it affect you or are you not?” he said. “That’s the only decision. I’m cold, too, but it’s just the mindset that you go into the game with.”

Quarterback Deshaun Watson got a taste of the cold last Saturday in the 13-3 win over the Ravens but nothing like what’s expected this week. He’s from Florida, played at Clemson in South Carolina and in Houston with the Texans but put on a brave face about what will be the coldest game he’s ever played.

“My main job is just going out there and executing the game plan and trying to win,” he said. “Not so much of what the weather is going to be because I can’t control that.”

Watson’s made steady and obvious improvement in his three starts since returning from an 11-game suspension following more than two dozen allegations of sexual misconduct during massage therapy sessions. The weather could pause the progress — or at least force Watson to use his legs more — but the optimism is real.

“We’re definitely getting there,” Njoku said. “We keep progressing every week. I feel like we’re not even scratching the surface of what we could be. And I mean that as a complete offense. We have so much talent on the offense that we haven’t utilized yet. So I think there’s so much more we can do.”

Even if the elements were perfect, the Saints would make it tough. Since Oct. 30, they’re third in the NFL with 16.4 points allowed a game, and they’ve gone five straight giving up 20 points or fewer.

Just like the Browns, they’re susceptible against the run, ranking 23rd (132.6 yards a game) and allowing 231 yards last week in a win over the Falcons. If the game turns into an endless string of handoffs, the outcome could be determined by which defense wins the test of wills.

In front of diehard fans willing to embrace the dangerous conditions.