Jim Ingraham: A weird game fit for one of the weirdest Browns seasons in memory 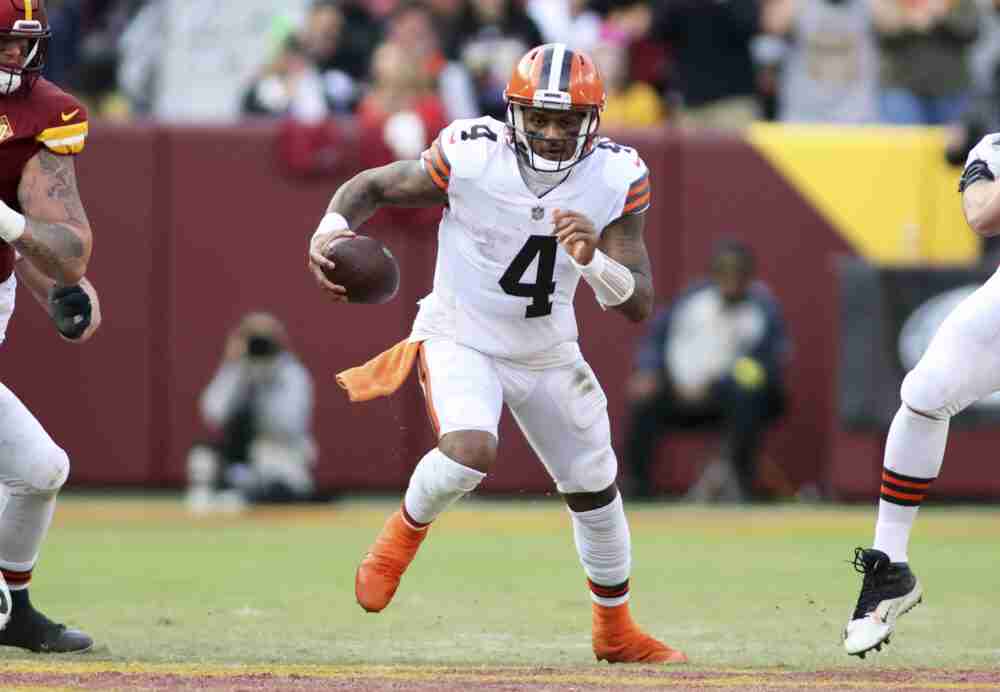 This won’t be the worst Browns season ever. But it might be the craziest. For a lot of reasons. There’s been a lot of stuff that has happened, both explainable and inexplicable. If you’re Dawg Pound certified, you’re familiar with the laundry list.

But for sheer “Wait, what?” craziness, the Browns’ victory Sunday over the Washington Commanders will be, it says here, the leader in the clubhouse for quite some time.

But first the good stuff: The Browns won 24-10. Nick Chubb ran for 104 yards. Deshaun Watson had a sparkling 122.5 passer rating. Grant Delpit intercepted two passes. Amari Cooper caught 105 yards worth of passes. Punter Corey Bojorquez averaged 46.8 yards in his four attempts. And the quarterback for the other team was Carson Wentz.


That’s a pretty good recipe for success on any given NFL Sunday.

Takeaways from an impressive second half and resilient victory

However, say what you want to about this edition of the Browns, but good, bad or incomprehensible, they know how to put on a show.

For example: The Browns, after receiving the opening kickoff, ran six plays from scrimmage, then punted on fourth-and-29.

Late in the second quarter, Cade York kicked a 25-yard field goal that would have given the Browns a 6-0 lead. But the Commanders were offside. Browns coach Kevin Stefanski took the three points off the board. The ball was moved to the Washington 3-yard line, but Watson failed to score on a keeper up the middle. Instead of a 6-0 lead, the Browns shaved their own lead to 3-0.

If Browns defensive coordinator Joe Woods is excused after the season, the smokiest of the smoking guns will be Woods’ defense in the second quarter, when Washington went on an epic 21-play, 96-yard touchdown drive that ate 11 minutes and 27 seconds off the clock and gave the Commanders a 7-3 lead.

Thanks mostly to Woods’ men, in the last 11:48 of the second quarter, Washington ran 25 plays from scrimmage and the Browns ran one — Watson taking a knee on the last play of the half.

Wentz, the second overall pick in the 2016 draft playing with his third team in the last three years, did everything he could to keep the Browns in the game in the first half by throwing passes over the heads of receivers or directly into the ground. A few minutes into the second quarter Wentz’s passer rating was 2.8.

Watson wasn’t much better. He only completed three passes for 23 yards in the first half. It would have been four, but surprised Browns tackle Jack Conklin purposely dropped a pass Watson threw to him in the second quarter.

Jedrick Wills Jr. says he’s trending in right direction, motivated by play of rest of O-line, would be ‘great’ if team picks up fifth-year option

The Browns got their act together in the second half, both offensively and defensively, outscoring the less-than-commanding Commanders 21-3. The floundering Wentz continued to flounder, while Watson regrouped and threw three touchdown passes — none to Conklin.

The Browns are 3-2 in the five games Watson has started since returning from his suspension. He has, more or less, made progress in each of his five starts, and against the Commanders, who have one of the best defenses in the league, Watson somehow managed to post a 122.5 passer rating on just nine completions (18 attempts). However, Watson was also sacked five times.

Nobody expected Watson to jump back into the fray after missing most of the last two seasons and start shredding opposing defenses Patrick Mahomes-style.

But Washington employs a legitimate above-average defense, so Watson’s performance felt like a potential corner-turning moment as he tries to recapture the rapture that in 2020 allowed him to lead the NFL with 4,823 passing yards, adding 33 touchdowns and only seven interceptions.

“In the second half you saw what the future can hold. Everything was just clicking,” Watson said.

In truth, this entire season revolved around Watson, whether he was serving his suspension, or now, as he’s been able to use the final six games of the season to sharpen his chemistry with his receivers and play caller Stefanski. One game remains in the season, next week’s finale at Pittsburgh.

It will not go into the books as a successful season. To the contrary, it will go into the books as one of the Browns’ most controversial seasons, due to the organization’s decision to trade for Watson and then sign him to a five-year, $230 million contract that redefined the market — much to the chagrin of NFL owners — and the pay scale for elite-level quarterbacks.

When Watson’s suspension turned out to be 11 games, instead of the four to six the Browns were probably hoping for, the script for this season changed dramatically.

The in-game orientation for the Browns’ new quarterback was necessarily pushed back considerably, which slowed the development of the offense as a whole.

The finished product won’t be seen until next season, when, unlike this year, there will be fewer “Wait, what?” games.

Takeaways from an impressive second half and resilient victory
Jim Ingraham: Fans can’t get enough of this Browns comedy … or is it a tragedy?