Closing season on high note won’t be easy against Steelers 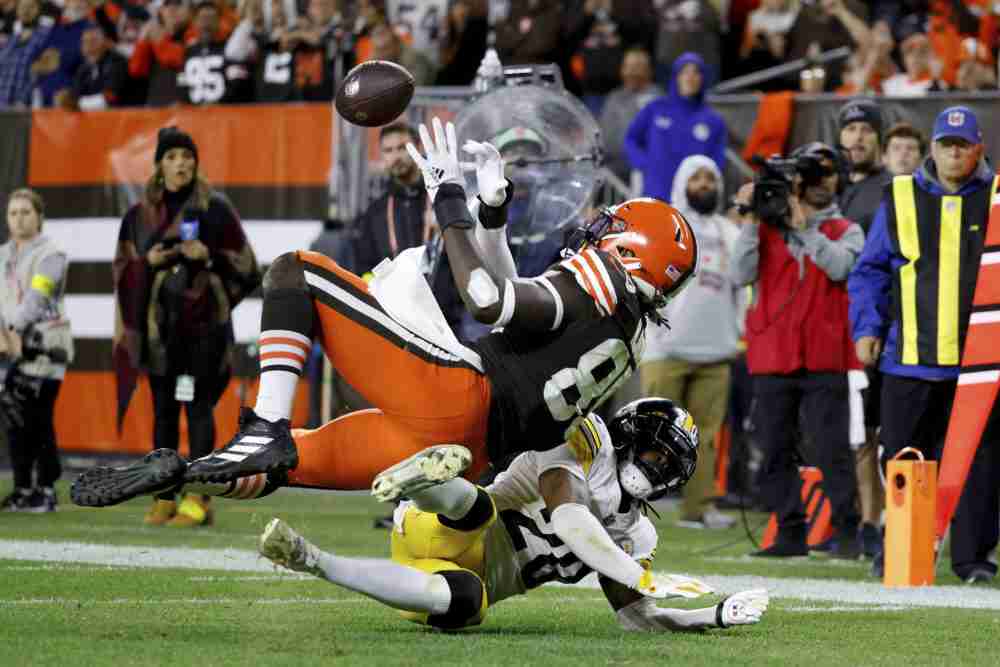 PITTSBURGH — The Browns have a litany of obstacles they must overcome to beat the Steelers on Sunday in the season finale.

The distraction created by defensive end Jadeveon was a late addition to the list.

“How we respond will show what the culture is,” defensive end Myles Garrett said Friday. “It’s all in action, and if we’re a brotherhood like we say we are, then we we’ll rally together and we’ll put up a helluva fight and we’ll get a win in Pittsburgh.

Before Clowney’s explosive comments became an issue, the Browns (7-9) were already facing a matchup against a Steelers team fighting to make the playoffs. They started the season 2-6 but have rallied to 8-8, including come-from-behind wins the last two weeks, and would make the postseason as a wild card with a win over the Browns and losses by the Patriots (to the Bills) and the Dolphins (to the Jets).

The Steelers have a 21-2 record against the Browns at Acrisure Stadium, including a series of wins in the final week. Coach Mike Tomlin is 24-7-1 vs. the Browns.

Jim Ingraham: Fans can’t get enough of this Browns comedy … or is it a tragedy?

“I know the Browns fans are pulling very, very hard for this win and they want this one to finish out the year and be able to go into the next season with two victories on our belt and especially against Pittsburgh,” said quarterback Deshaun Watson, who will make his first appearance in the rivalry. The 29-17 win in Week 3 came during his 11-game suspension following more than two dozen sexual misconduct accusations.

“I heard somewhere yesterday that we haven’t swept the Steelers since the ’80s or something like that,” said Amari Cooper, who had seven catches for 101 yards and a touchdown in the first matchup. “So obviously that would be a real cool thing to do with the players on this team and also just because of the rivalry being able to spoil their playoff hopes. Yeah, so I know how important it is.”

If Clowney knew, he ignored it.

He ripped the coaches in an interview with Mary Kay Cabot of Cleveland.com for not supporting him and favoring Garrett. The story prompted the Browns to send Clowney home before practice Friday and not allow him to play in the game.

Johnson pointed to the 41-16 victory in Cincinnati last season after the Browns decided to cut receiver Odell Beckham Jr. after his dad called out quarterback Baker Mayfield on social media.

The Browns showed character last week in a 24-10 win over the Commanders. The Browns had been eliminated from playoff contention the previous week with a loss to the Saints, yet went on the road and helped knock Washington out of the playoff picture.

Doing the same to the Steelers would be on another level.

“It would be huge for us,” left guard Joel Bitonio said. “They’ve been a very, very good franchise at least my whole career. We’re treating it like a very important game for us.

“We know it’s going to be a big challenge. But I think we’re up for it and I think we want to go out this year on a winning note and just prove to ourselves that it stinks we’re not in the playoffs and we’re not playing for what we want but we do have some wins under our belt in some important games.”

A win would give the Browns an 8-9 record for the second straight year and send coach Kevin Stefanski into his fourth season with a two-game winning streak and the chance to have Watson for a whole season. He played his best half in five games with the Browns against the Commanders, throwing three touchdowns in the second half and finishing with a 122.5 passer rating.

“I think he would be the first to tell you some of the footwork and the rhythm and the timing that we are not 100 percent there yet, but we have gotten a lot better since we started for sure,” Van Pelt said. “Really impressed with his improvement each week. Now you are seeing what we are expecting from him moving forward.”

Watson wants to continue checking off things from the to-improve list and noted the process never stops. But he realizes what a strong game from the offense would mean heading into the long offseason, which he said he plans to spend in his new house in Northeast Ohio.

“It would feel really good,” he said. “Not just for myself but for this whole team and this organization and what we want to do for the 2023 season. So that’s what we’re looking forward to is playing a complete game start to finish and go out there and get the W.”

The Steelers are much improved since the Browns beat them in Week 3 on a Thursday night.

Rookie quarterback Kenny Pickett, the No. 20 pick in the draft, replaced Mitchell Trubisky, settled in after a shaky start and threw back-to-back winning touchdowns in the final minute — a first in NFL history for a rookie. The run game took off with running back Najee Harris getting healthier. And the defense is among the league’s best since the return of outside linebacker T.J. Watt, the 2021 NFL Defensive Player of the Year who missed seven games with a pectoral injury.

Since their bye in Week 9, the Steelers rank ninth in the NFL in rushing (146.3 yards per game), second in third-down conversions (53.5 percent) and third with four turnovers. Pickett is the first rookie since the AFL-NFL merger in 1970 to win four or more games and throw fewer than two interceptions in November and December. He has one interception in his last five starts after five in his first five starts.

The defense has made a similar jump since the bye.

The Steelers have a plus-seven turnover margin since Week 10, have held opponents to a 78.2 passer rating (second in the league) and rank third against the pass (173.5 yards), sixth against the run (95.1 yards) and fourth in scoring (16.9 points). Watt returned Week 10.

“He makes that defense go and it’s shown since he’s been back and so it’ll be a great challenge for us for sure,” running back Nick Chubb said.

As much as the Browns and their fans hate to admit it, the ability of the Steelers to always be relevant and rebound from terrible starts is commendable.

“I know they’re our rivals, but it is impressive,” Bitonio said. “Look at it the last two years really, you think teams have written them off and they’ve been right there at the end trying to make the playoffs and fighting.

“And I do think they have a culture of winning and doing those things over there. It’s a testament to their players, to their coaching staff and really just taking it one game at a time like we talked about and they’ve done a really good job of that.”