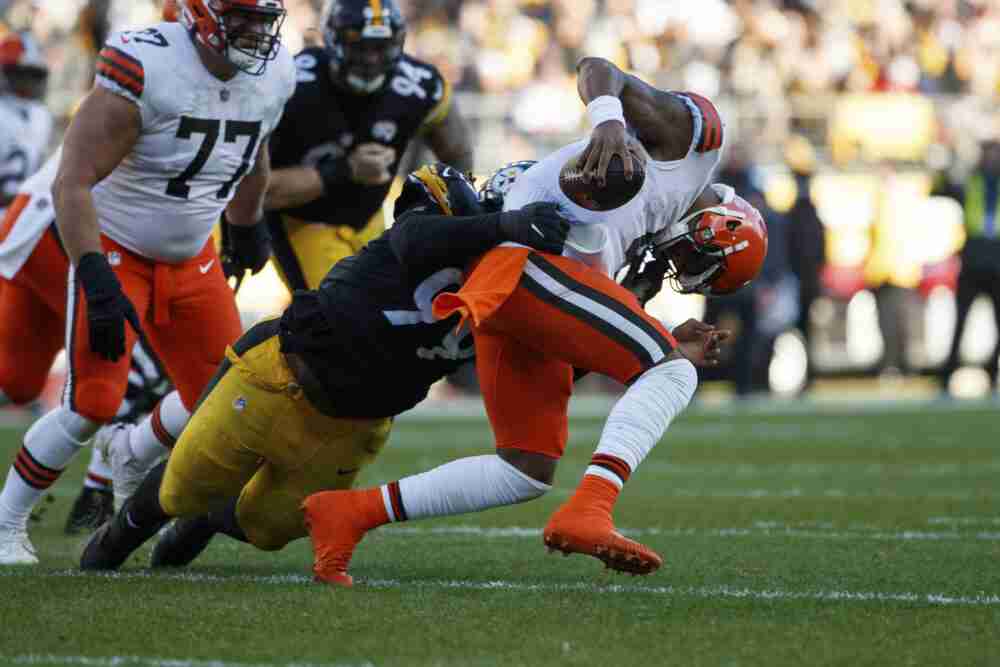 PITTSBURGH — Deshaun Watson received a rude welcome to the rivalry with the Steelers.

The matchup may have been new to Watson but it was eerily similar to what so many previous Browns quarterbacks experienced at Acrisure Stadium, formerly Heinz Field. Watson was harassed and humbled in a 28-14 loss Sunday in the season finale.

He completed 19 of 29 passes for 230 yards, two touchdowns, two interceptions and an 84.0 passer rating. He was sacked seven times and hit 10. He rarely had time to get comfortable in the pocket, and when he did, he struggled to find a receiver.


“You just gotta give the Steelers credit, they did what they needed to do to create some pressures, some turnovers and they capitalized on that,” said Watson, who was acquired in a March trade but missed the teams’ first meeting as he served an 11-game suspension following sexual misconduct allegations. “So that didn’t go our way and we just gotta watch the tape and just try to get ready for this offseason.”

Coach Kevin Stefanski said the problems on offense were a group effort.

“That’s a tough, tough defense at their place,” said Stefanski, who stopped Watson in the locker room for a talk. “Made some plays and other times, we just got to make a play around him, give him a better play call, all those type of things. It just wasn’t our best, really in any facet.”

Watson’s six-game sprint to end the season included progress and flashes of brilliance but ended in frustration. The Browns went 3-3 with him as the starter to finish 7-10 and miss the playoffs for the second straight year and 19th time in the last 20.

He played two games in the cold, wind and snow at FirstEnergy Stadium, but the Steelers defense might have been a tougher foe. Outside linebacker Alex Highsmith had 2.5 sacks, tackle Cameron Heyward two, end Larry Ogunjobi one (the referee missed a face mask) and outside linebacker T.J. Watt a half-sack. Right tackle James Hudson III struggled in place of Jack Conklin, but the whole line had issues.

“I don’t ever go into a situation or a game expecting any type of pressure because I trust in my guys up front,” said Watson, who showed off his speed and elusiveness, running six times for 44 yards, including a 21-yarder. “So you gotta give them credit for the games and the stunts and things that they were doing to try to create pressure and you gotta give the secondary credit for just doing their best to try to hold their disguise as much as they can and try to disrupt the passing game.”

Mailbag: Have we seen enough of what plays work for Deshaun Watson?

Stefanski put the game in Watson’s hands, as the Browns tried to spread out the heavy personnel of the Steelers and attack them through the air. The pass rush made that difficult, then Watson compounded the problems with two interceptions that led to 10 points.

“We just tried to get a dig on the far hash and the ball just kind of sailed and (cornerback Levi Wallace) made a good play,” Watson said of the first pick. “And then on the other one it was a slant and I guess it was (safety Damontae Kazee) beat the slant to the spot. So that was pretty much it.”

So much of the final six games was about Watson getting comfortable after not playing a game in 700 days and adjusting to a new coaching staff and offensive system. He said every game was “significant” in his mission to get back to the player who made three straight Pro Bowls with the Texans and led the NFL with 4,823 passing yards in 2020.

“To be back out there on the field is a blessing, to be able to go out there and try to get W’s, finish 3-3 with me in the last six games,” he said. “So the future is definitely bright for the Cleveland Browns and regardless of what people say or what people think, I’m here for a reason and it is what it is. So we gotta focus on what we can do better to get better. So at this time next year we’re in those playoffs.”

#Browns Deshaun Watson said being back on field is blessing, excited for future. pic.twitter.com/qrPxoonics

Receiver Amari Cooper compared the improvement in Watson’s six games to the progression made in training camp and the preseason.

“It feels like, OK, now we’re ready for the season,” Cooper said. “So sometimes it’s just the way the cookie crumbles. All we can do is look forward now.”

Watson’s personal timeline of suspension and acclimation was the No. 1 story of the Browns season.

“We treated Jacoby (Brissett) as the starter all year because that’s 11 games, that’s who he was, we had a system that was running pretty well with him, then you come with Deshaun and they’re different quarterbacks, so you’re learning,” left guard Joel Bitonio said. “In the last six weeks you’ve seen the flashes where Deshaun is that player and he can do some things and we’ve got to help him out as an offense, but you see those special things that he can do with his legs, his arm and I think we can create an offense going into next year where we can really showcase that.”

Watson wasn’t surprised the transition was hard after the long layoff.

“I knew it was going to be challenging,” he said. “I knew I wasn’t going to walk in and just be the MVP of the NFL. I put in a lot of work and I got a long way to go. So I wasn’t naive to the point of where I’m just walking in and, hey, we was just going to go to the playoffs and go undefeated and do all these things.

#Browns Deshaun Watson said he knew his six games were going to be a challenge after long layoff pic.twitter.com/7s2UBuZFV7

The Browns expect way more ups than downs moving forward after trading a net of five draft picks for Watson and signing him to a five-year, fully guaranteed $230 million contract.

“Deshaun’s a heckuva quarterback, can extend the plays and make those big-time throws,” running back Kareem Hunt said. “So the future’s bright for them.”