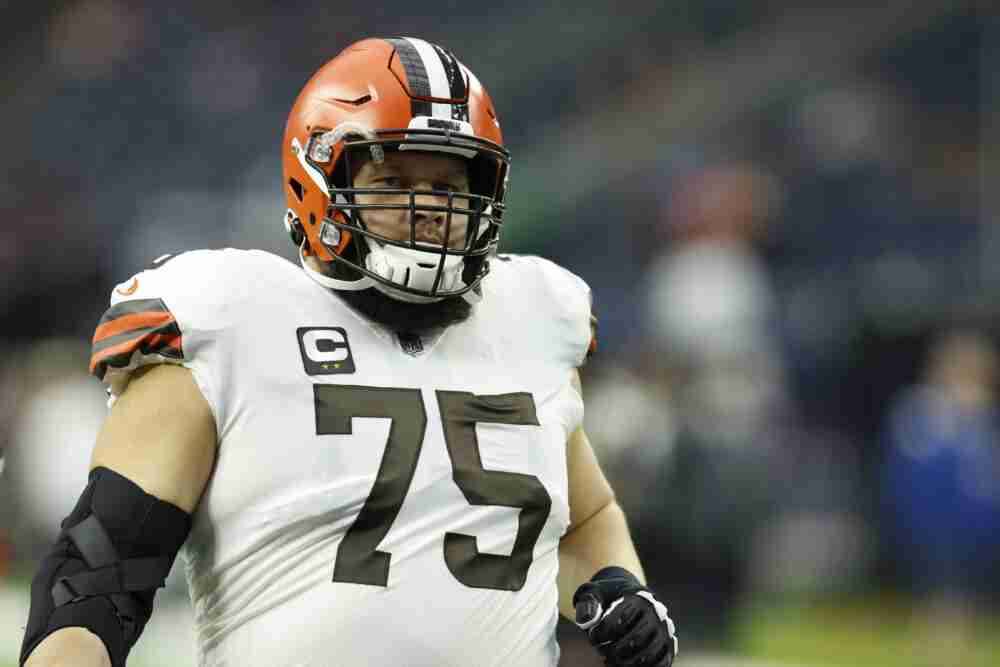 Joel Bitonio can hear the clock ticking. Not exactly Marisa Tomei as Mona Lisa Vito stomping her foot on the porch in “My Cousin Vinny,” but the sense of urgency is there.

Bitonio, the left guard who was named first-team All-Pro for the second straight year Friday, has always taken losses hard. He’s too talented and too dedicated to simply accept defeat.

Bitonio’s tone was different after the Browns lost 17-10 to the Saints on Christmas Eve and 28-14 to the Steelers on Sunday to end the season with a 7-10 record. He was dejected.


“I hate using the word, but I’m getting older,” he said Monday as players cleaned out their lockers. “I’m getting older, and you don’t know how many years you have left playing. I’m not in Year 2 or 3 where it’s like, hey, I’ve got a lot of time left.

“So it’s one of those things where I want to win. Everybody wants to win, but you put in the work, you play this game, obviously we’re paid a lot of money. It’s a dream to play this game, to just even have the opportunity to play it. But at the end of the day, we all want to win a Super Bowl, and you feel like a little bit of your career’s empty if you don’t have that opportunity. So you run out of time eventually.”

Bitonio turned 31 in October and was a second-round pick (No. 35 overall) in 2014, so it’s a safe bet he’s on the back nine of his career. His performance hasn’t slowed, as evidenced by the back-to-back All-Pros and five straight Pro Bowls, but he knows the realities of football and life.

He also watched good friend and left tackle Joe Thomas play at a Hall of Fame level — he’s a finalist for Canton in his first year of eligibility — without enjoying team success. Thomas went to 10 straight Pro Bowls but had only one winning season and never played in the postseason.

“I’ve talked to Joe a bunch,” Bitonio said. “I think that’s his biggest realization. He did everything in his power, and it wasn’t enough and that frustrated him towards the end of his career, and obviously the end of his career was really rebuilding for us as a franchise. So that was definitely a frustrating point.

“I think we’re hopefully going to get to the point where at the end of my career we’re going to be competing for things, so hopefully we have some time. But he’s definitely been frustrated by that throughout his career.”

Bitonio’s first year featured a fast start, as the Browns were 6-3 and in first place in the AFC North. The wheels quickly fell off, with Johnny Manziel inserted into the lineup and five straight losses to finish.

Bitonio missed six and 11 games with injuries the next two seasons, then returned for the bottoming out in 2017. Bitonio hasn’t missed a regular-season snap since the start of that season — he was sidelined for the wild card game in 2020 on the COVID-19 list — and has ridden the roller coaster of improvement, 11-5 and a playoff win, then unrealized potential and unmet expectations the last two years.

Not sustaining the brief success has been difficult to handle.

“It was frustrating,” Bitonio said. “It’s never easy in the NFL, but I thought that was going to take us to that level of we’re a playoff team every year, we’re going to try and compete for the AFC North every year and see where we’re at, and it didn’t happen the last two years. But I do have faith that we have the right core players, the right coach to take us to that level.”

The Browns had a lot going on this year, most significantly the 11-game suspension of quarterback Deshaun Watson and his return for the final six games. That affected everything, but Bitonio believes they still could’ve made the playoffs if they had closed games more effectively. They went 1-4 in games decided by three points or fewer and had a late chance against the Saints.

“It sounds like an excuse, but the NFL is such a close-game business. Every game’s meant to be close,” he said. “If you look back on the season, there’s four games, five games that you’re like, even if we flip two or three of those, it’s like we’re sitting at 10 wins and you’re in the playoffs, and that’s something I think back on.

“But you have to figure out why you aren’t executing in those moments. It’s like you just have to figure out a way to do it. I think once you start doing it, it just happens, and then you’re going to turn into a consistent winner.”

Bitonio is the longest-tenured member of the team. Since his arrival, the Browns are 51-96-1, including 1-1 in the playoffs.

“I really take it one year at a time,” he said. “That’s my overall record. And you look back on it, there’s been a lot less successful seasons than successful seasons. But for me, I’ll look at the big picture for myself, what I want to do to get better, how I want to take that next step in my game because I think there’s always room to improve. And then big-picture thing, what can we do for this team next year?

“I don’t really look back on 2016 or ’17, that’s really not going to affect us this year. So it’s tough. You’d rather win games than lose games. And I want to win.  Finishing my career out with some winning records would be great.”