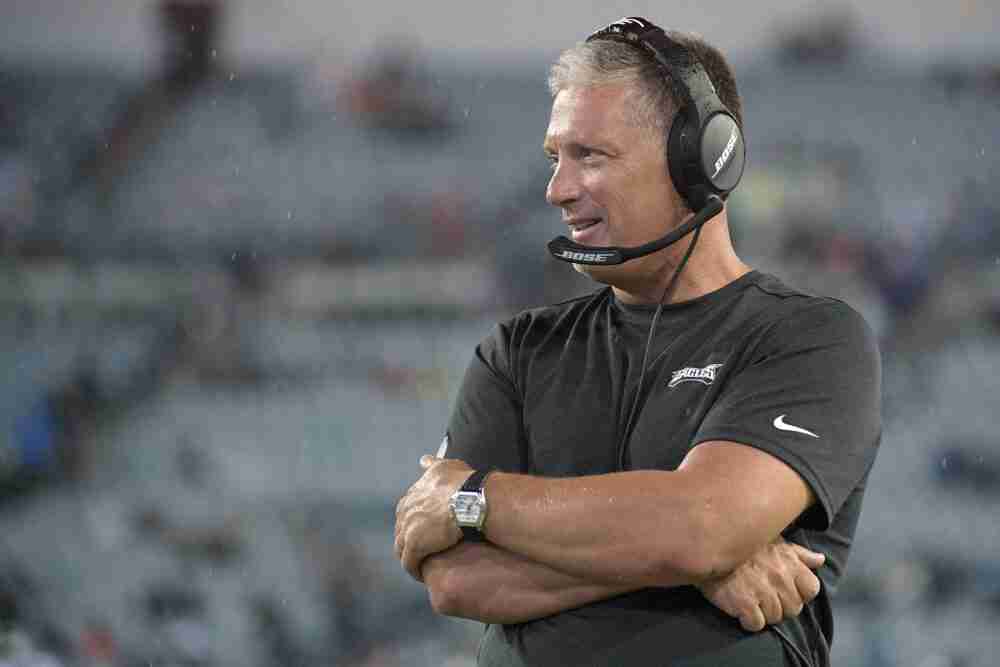 What do you do when your defense is uncoordinated?

His name is Jim Schwartz, an NFL-lifer who was officially hired Wednesday to fix the Browns’ grossly uncoordinated defense.

But bringing some order to the chaos that is Myles and the 10 dwarfs is only Schwartz’s second-most important job.

Schwartz’s most important job, starting immediately, is to save Kevin Stefanski’s job.

The tick-tick-ticking of that clock has officially started, and it’s not going away anytime soon. The NFL’s 2020 Coach of the Year is coaching for his job, starting now. He’s about to enter the fourth year of his five-year contract, and he needs all the help he can get.

In the last two years, The Kevins are 15-19 while finishing last and almost last in the AFC North. Fortunately for Stefanski, one of the NFL’s Swiss Army knives has fallen into his lap.

The 56-year-old Schwartz loves the game so much he worked for free just to get his foot in the door, back in the early 1990s, when an unknown coach named Bill Belichick was putting together what would become a legendary staff of assistants with the Browns: Nick Saban, Kirk Ferentz, Ozzie Newsome, Scott Pioli, Thomas Dimitroff, Al Groh, Eric Mangini, Phil Savage and Mike Tannenbaum, to name a few.

This is a coach who has been around the football block multiple times.

“Play fast, think quick,” is one of Schwartz’s pet pronouncements.

Mailbag: Does this regime not value defensive tackles?

In his new job he’ll have another: “Win a lot, starting immediately.”

The Browns aren’t totally broken. But the defense is. That’s the side of the ball Schwartz is being paid to fix. It’s also the side of the ball that, if it remains broken for another year, the head coach will likely join the legion of failed football minds for whom the team in Cleveland was an unsolvable puzzle.

In his introductory session with the media, Schwartz, who has been around long enough to know how the coaching carousel game is played, was an equal-opportunity bouquet presenter. He praised ownership (ugh!), general manager Andrew Berry and the head coach whose job he’s been hired to save.

“I like Kevin. We came up the same way. He started at the bottom like I did. Those three made this a very attractive job,” said Schwartz in referencing ownership (ugh!), Berry and Stefanski.

In truth, this is a huge, and very fortunate, hiring for the Browns, because it addresses not just the elephant in the huddle — a defenseless defense — but with an experienced coach who has a proven track record of being an all-around football handyman, arriving just in time for a head coach whose shelf life in Cleveland seems to be growing grimmer by the game.

In addition to adding a new coordinator with a reputation for being able to fix a broken roster, Schwartz’s arrival also adds an experienced, and much-needed, fresh pair of eyes and opinions regarding what in the actual heck is going on with this Browns team.

Why have those three who made this a very attractive job been unable to stop the bleeding on the defense? Why all the weekly blundering and defensive misfires that have sabotaged the team’s effort to become a team others don’t want to play, instead of one they can’t wait to play?

The good news for Schwartz, and his new employers, is that there are chuckholes only on one side of the roster. You could argue that Cleveland’s offense is a parade waiting to happen. But the defense is a ruptured water main that’s already happened.

In Schwartz’s year with the Bills, the team had three double-digit sackers on their defensive line.

If so, the Browns’ defensive players should all be close to earning their doctorates.

“I feel a tremendous responsibility to the fans to get this right, to reward them,” Schwartz said. “There’s only one place I think that could outdo the (Super Bowl) parade we had in Philadelphia — and we’re here right now.”

So Wednesday was a good day for the Browns, their fans and especially for the coach of the fans’ favorite team. In his first day on the job, Jim Schwartz seemed to feel all the right emotions. His experience, his ego-free view of himself and his sense of the problem at hand make him an ideal addition to a coaching staff — particularly a head coach — that needed one.

Offense sure to change next season with Deshaun Watson, but just how much is a mystery
Safety Grant Delpit’s confidence not shaken by outside criticism, he just wants to be one of the best