Notes: Hue Jackson says he’ll have at least 100 fellow lake jumpers, is eager to put plunge and losing in the past 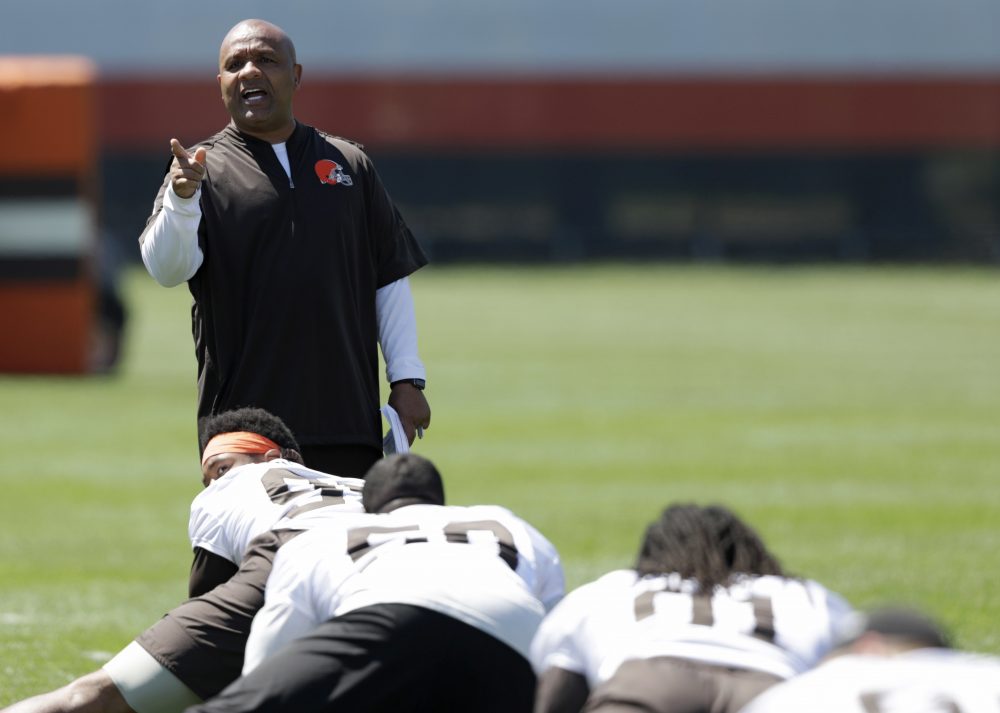 BEREA — Lake Erie will turn brown and orange for a few minutes Friday.

Coach Hue Jackson will finally make his promised plunge, and will have plenty of company from the Browns organization.

“Right now, I know that we have 100 for sure,” Jackson said Wednesday after an organized team activities practice. “That says a lot. I did not even include the coaching staff in that, but they better come.

“We are going in, and we are going to come out, too. I promise you that.”


Jackson is “very much so” looking forward to putting the guarantee and plunge behind him. After the Browns went 1-15 in his first season in 2016, he said if they didn’t improve the next season he’d jump in the lake.

Of course, in 2017 they became just the second team in NFL history to go 0-16. The time has come to make good on his word.

“It is called a dip and get out. Get in, get out and move on with your life,” he said. “I am excited about our organization, Dee and Jimmy (Haslam) and being a part of everything that we are trying to accomplish here from top to bottom. The people in the organization have been outstanding.

“I have learned to shut my mouth a little bit more — do not say something that you might end up having to do. We will get it behind us. I think it is going to be something special and for a great cause, as well. Like I said, it is going to be a cleansing of our organization, too.”

The event will be private, but Jackson will use it to raise money for his foundation to stop human trafficking. He said he’ll donate $100 for every team employee who jumps in with him.

The total could climb above the expected $10,000 if the players decide to take a dip. Many were around for the historically bad 1-31 stretch that Jackson is looking to leave in the water, which will be lucky to hit 60 degrees.

“That is my tomorrow speech,” he said. “If they want to come, those who want to get that off of them, come on and jump in with us.

Cornerback Denzel Ward, the No. 4 pick out of Ohio State, got low in his crouch and looked across at receiver Josh Gordon inside the 5-yard line. Gordon cut to the back corner of the end zone and Tyrod Taylor threw toward his back shoulder. Ward reached in and didn’t stop working until he had knocked the ball loose for an incompletion.

“He is talented,” Jackson said. “He is getting better, and the more that he competes with Josh (Gordon), (Jarvis) Landry, Corey (Coleman) and the rest of our (receiving) crew, the better he is going to be.

Ward has been playing on the second-team defense. TJ Carrie and E.J. Gaines were the starters Wednesday.

“Very savvy rookie, very savvy. Very confident,” Carrie said of Ward. “As you can see, he played exceptionally well today, had a number of pass breakups, a number of great plays out there.”

Jackson showed the team LeBron James’ interview after the Cavaliers beat the Celtics in Game 7 of the Eastern Conference finals in which he defended his teammates and praised their value.

“I thought it was tremendous,” James said. “I thought what he said about his other teammates and how they are a huge part of it and how people who have not played the game or wore shorts or been in a locker room understand what it takes to win. I thought that was sensational. I said that to our football team.”

Taylor said the comments showed James as a “true leader.”

“He’s never selfish about his accomplishments. He realizes that it takes a team for him to be the person that he is and he appreciates his teammates,” Taylor said. “How that can relate to us is no one person is bigger than the team.”

No. 1 pick Baker Mayfield continued to be third in the quarterback rotation and received limited repetitions in team drills.

“Just working the process for him. As we go, there will be more that he gets,” Jackson said. “We have got to start him off and get him acclimated to all of this and how it all works through meetings, his teammates, the locker room, being on the field and being coached.”

Mayfield took almost no snaps under center at Oklahoma and has been working to get comfortable. Jackson said he’s improved, and that was obvious on Mayfield’s best play Wednesday. He dropped back, faked a handoff, spun around and immediately fired a strike to tight end Seth DeValve down the seam.

“He has done some good things,” Jackson said. “He obviously is learning the National Football League game, but he is working at it each and every day. He goes in there and gets his reps, and he makes the most of them.

“We drafted a very talented player. Glad that we have him. He works extremely hard. He is competing hard.”

“He is doing some good things. I have been really impressed by him, a very talented player,” Jackson said. “I would hate if he had to miss any time, but I would rather it be now than later on.”

Callaway, who was suspended by Florida for the 2017 season, left practice during rookie minicamp with a toe injury.

** Linebacker Jamie Collins has returned to practice after missing the final seven games of last season with a torn medical collateral ligament. Jackson expects him to be full-go for training camp, and hopes he can enter team drills by minicamp in a couple of weeks.

** Right guard Kevin Zeitler (hamstring) has been held out of team drills.

** Linebacker Tank Carder (knee) and cornerback Howard Wilson (knee) remained on the side working with trainers. They missed all of last season.

Carrie called defensive coordinator Gregg Williams “unorthodox” in that he often changes the depth chart, moving players from starter to backup to keep them on edge.

** Jackson said the battle to replace Joe Thomas at left tackle won’t really get going until the pads come on in training camp. Shon Coleman has worked with the starters, with rookie No. 33 pick Austin Corbett the backup.

** Former Eagles linebacker Mychal Kendricks visited the Vikings today and is scheduled to head to Oakland and then Cleveland, according to the St. Paul Pioneer Press. The Browns have solid starters in Collins, Christian Kirksey and Joe Schobert.

“We are not going to turn down good football players,” Jackson said.