Lethal as a runner and improved as a passer, Lamar “Baby Vick” Jackson has respect, full attention of Browns 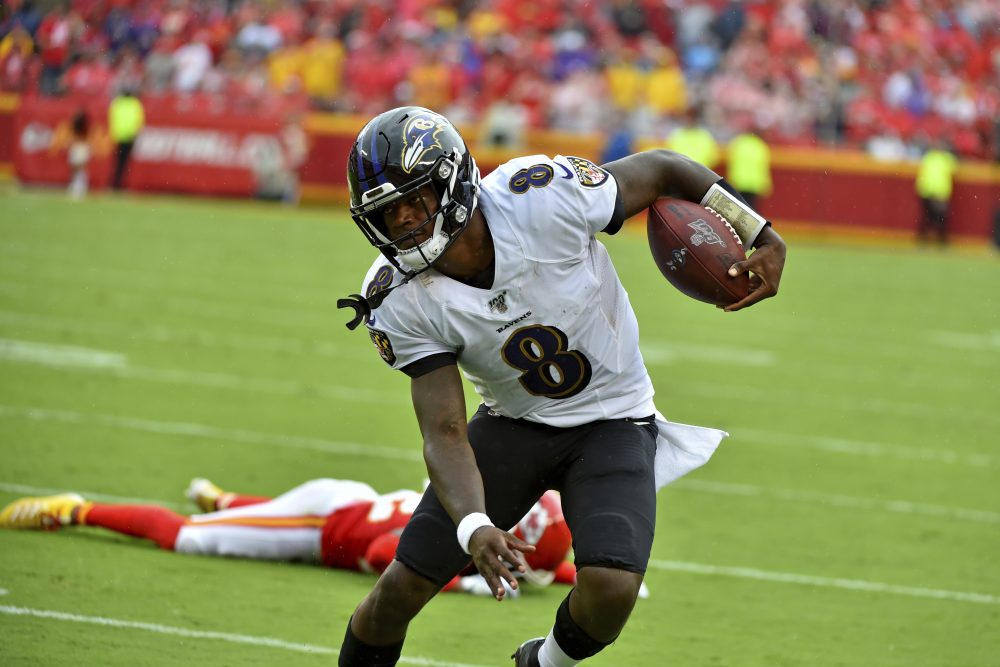 BEREA — Lamar Jackson is different than any other quarterback in the NFL.

So the Browns have an unorthodox way to simulate facing him.

He was joking, but his point rang true.

“To be honest, he’s probably the closest thing I’ve seen to Michael Vick,” Wilks said. “This guy is extremely dynamic, can make plays when you don’t think there’s a play there to be made. He’s just Houdini, I guess, but phenomenal not just with his legs but his ability to get the ball downfield.”

The Browns (1-2) face the Ravens (2-1) on Sunday in Baltimore with the top spot in the AFC North on the line. If the Browns don’t contain Jackson, they won’t have a chance.

Jackson, the No. 32 pick in the 2018 draft, is putting up video game stats to match his video game skills. He’s fourth in the NFL with seven touchdown passes, fifth with a 113.9 passer rating, tied for fourth with Tom Brady with 8.6 yards per attempt, tied for second with 16 completions of 20 yards and ninth with 863 passing yards.

“It’s a different dynamic. It already makes the game funner for me, just knowing we’re going to get a chance to get after the quarterback,” safety Jermaine Whitehead said. “Definitely, definitely raised the bar of that team a whole lot with him moving around, and they feed off his energy. So we’re going to try to keep him in the pocket.”

Jackson’s unique because of his elite speed and open-field elusiveness. He rushed for a 9-yard touchdown Sunday in a 33-28 loss at Kansas City in which he outran a defensive end, juked a defensive back and spun away from another. On a different play he left Chiefs lineman Alex Okafor grasping at air and then falling to the turf.

“He’s wild, man. He’s amazing,” Ravens running back Mark Ingram said. “I don’t think there is anything like him in the league, as far as just extending plays and being able to juke defenders. He’s special.”

Jackson was the ultimate playmaker at Louisville, winning the Heisman Trophy in 2016 and finishing third the next year when Baker Mayfield won it. While his big-play ability as a runner keeps defensive coordinators up at night, his growth as a passer is one of the most important stories in the NFL through three weeks.

“The first thing you see is he is more poised and under control when he is throwing the ball,” coach Freddie Kitchens said. “They have done a tremendous job working with his throwing, his accuracy and things like that.”

Jackson was 17-for-20 for 324 yards, five touchdowns and a perfect 158.3 passer rating in the 59-10 opening win over the Dolphins, and has thrown an NFL-best 221 passes without an interception. He’s erasing doubts by the day.

“I never thought he was a bad passer,” Whitehead said. “I always respected him as a total quarterback.”

He’s 8-2 as a starter in the regular season, including a 26-24 win over the Browns in the finale last year to claim the AFC North title.

Jackson followed the Miami game with a record performance in a 23-17 win over Arizona. He rushed for 120 yards and passed for 272, becoming the only player in league history to run for 120 and pass for 250 in a regular-season game. Former 49ers quarterback Colin Kaepernick did it once during the postseason.

“I don’t think we’ve seen a quarterback that can move around like this since Kaepernick when he had the Super Bowl run,” Whitehead said. “So I hope we’ve just got a game plan to keep him in between the numbers and not let him outside and running down the sideline.”

Jackson struggled at the start Sunday before leading a rally in the loss to the 3-0 Chiefs. He had several overthrows on deep balls.

“Those were just bad passes,” he told reporters in Baltimore. “When I watched film, I was mad. I was cussing. I want those back. I feel like the game would have been different.”

Jackson was offended and refused when the Chargers asked him to work out as a receiver at the scouting combine. He wants to be known as a thrower.

“I hate running. Only if I have to, but my job is to get the ball to the receivers, the tight ends, running backs,” he said. “If I have to run, I’ll do it, but I’d rather just sit back and pass it. I like throwing touchdowns instead of running them.”

Quarterbacks who run often — he had 147 rushes for 695 yards, 4.7 average, five TDs as a rookie — inevitably face questions about whether they can sustain that style, because they’re susceptible to more hits and injuries. Ravens backup Robert Griffin III is a great example.

The addition of speedy rookie receiver Marquise Brown from Oklahoma gives Jackson a vertical threat that forces the safeties to cover 50 yards downfield, creating space for his trio of tight ends in the passing game and whoever is carrying the ball in the run game. But Jackson is the one who really changes the game.

Wilks said the Browns began planning for him in the spring, and Kitchens said they’ve used a couple of guys to mimic Jackson during practice this week, even receiver Odell Beckham Jr. — although he may have been joking.

“You just do not believe me, do you?” Kitchens said. “If you can find guys like that everywhere, maybe it would not be such a phenomenon. It is hard to replicate what he does in practice, and you do not really get to the speed of it until you actually get in the game. I think the guys that are here realize that from last year.

“He is a tremendous challenge to handle, especially now that he is throwing the ball better.”

Odell Beckham Jr., frustrated by double teams and finding his way as leader with new team, reflects on memorable appearance vs. Ravens
Browns plan to take fight to physical Ravens, beat the bullies at their game