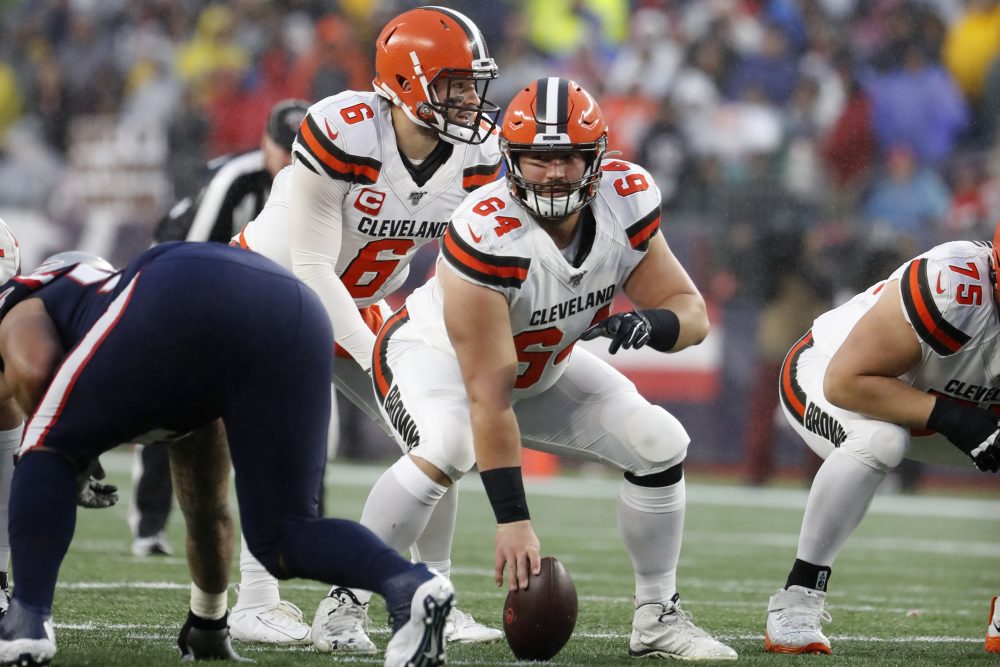 No one knows when the Browns will gather again in the posh locker room at team headquarters in Berea, so the players have settled for hanging out in a Zoom room.

While special teamers meet Thursdays during the virtual offseason program, the rest of the players try to bond.

“(We) kind of sit on a Zoom call and just do what you would have done if you were sitting in the locker room,” center JC Tretter said Tuesday on a Zoom call with reporters. “Talk and chat and we’ll go over plays and Baker (Mayfield) will run us through different things and we’ll talk through our calls and do all that. But a lot of that is just a chance to get to know each other and see each other’s personalities.

“We have a lot of new additions. That will be something that will be different, just like the interactions with rookies this year is a little different than previous years. But trying to find ways just to get to know people as human beings, what are their families like, how are they doing, where are they living, all that stuff is important. We’ve kind of got that built into our program, allowing players to take the lead and go through plays as well as just be guys and be guys in the locker room, just virtually.”

The offseason experience is new for everyone, including Tretter, who’s entering his ninth season. He normally would’ve spent the past six weeks in Berea, learning first-year coach Kevin Stefanski’s offensive system and greeting his new teammates.

“A lot of it, it’s different now,” Tretter said. “Usually you have those times one-on-one in the facility where you have a little downtime, get to know guys and you just don’t have that now. So a lot of it’s getting used to it.”

HAIL TO THE CHIEF

Even before the coronavirus changed the world, Tretter was never going to forget 2020. He got married then was elected president of the NFL Players Association.

His resume is impressive — he earned a degree in industrial labor relations from Cornell — but he wasn’t raised in politics.

“I was not middle school student council president. We’ll dispel that right away,” he said. “I was not an elected official in high school, either. But I always wanted to get more involved. I studied it in college, so I had a background in it.”

Tretter says agreement with NFL to return during pandemic faces “long list of hurdles,” remains “a ways out”

Tretter, 29, waited until he was comfortable with his status and preparation as a player. He had served as an alternate union rep for the Browns, and was elected president as players voted to approve a new collective bargaining agreement.

“I probably officially made the decision that I was going to run for president right after the season and then put a lot of time in researching and making sure I knew all about the topics and the issues and then had the election down at our meetings,” he said. “It was obviously a really cool experience. It’s an honor to be elected by your peers for anything, but this is a role that I’m passionate about and just being able to help the current players and look after them as well as the guys who are going to come after us is something that made me really interested.”

The first priority of new general manager Andrew Berry was improving the offensive line, so he signed right tackle Jack Conklin in free agency to a three-year, $42 million contract and drafted Jedrick Wills with the No. 10 pick to play left tackle.

“Jedrick’s been great, seems like a really bright kid, seems to be excited to work,” Tretter said. “I’ve spoken a bunch to Jack. It’s nice to have another veteran in the room who’s been extremely experienced, won, had a lot of individual success.

“He’s been a great addition of just being able to step in and pick up the system, I think he’s kind of built for it. Another great personality and kind of fits right in.”

“I was lucky enough coming into this league to join a room with a lot of really great guys, a lot of older guys who kind of took the young guys under their wings and kind of shortened the ropes and taught them how to be pros,” Tretter said. “And I’ve now entered the part of my career that they were at then where that’s kind of my role, and my role is to welcome guys into the room and make sure they’re comfortable.”