Left tackle Jedrick Wills Jr. knows he has to be better this season — and expects to be 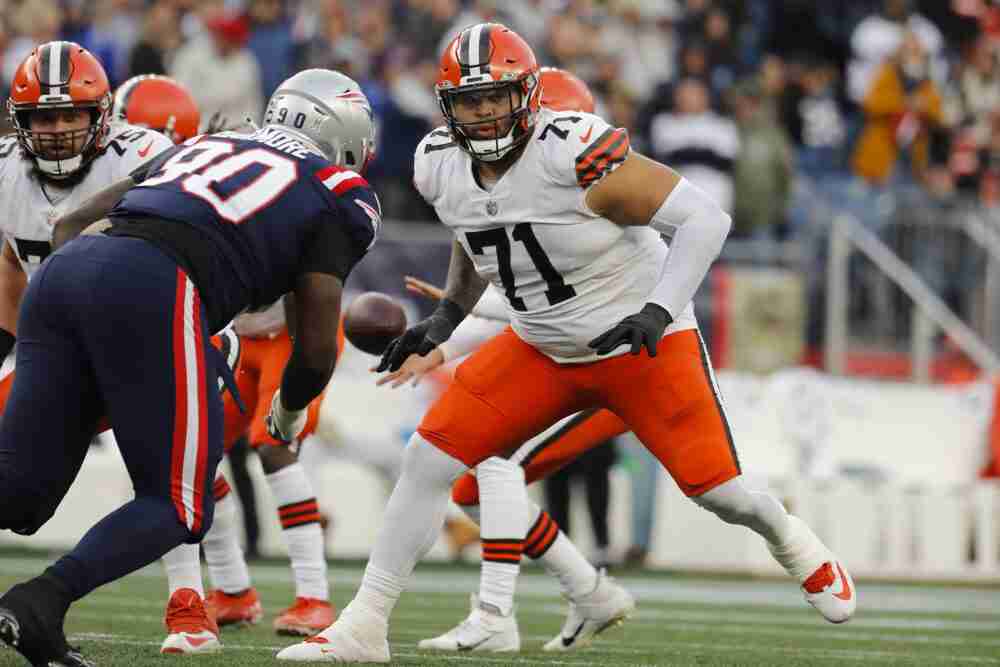 A disjointed rookie season due to COVID-19 restrictions. A nasty, nagging ankle injury in Year 2.

Left tackle Jedrick Wills Jr.’s career with the Browns got off to a “frustrating” start, but he’s determined to leave that in the past in 2022.

“It’s a big year. I know that, everybody knows that,” he told The Chronicle-Telegram at the end of minicamp in June. “I just made sure that I put myself in the best position to excel.”


If the offensive line is going to fulfill high expectations and its vast potential, Wills must perform more consistently than in his first two years and approach the level of guards Joel Bitonio (All-Pro in 2021, four-time Pro Bowler) and Wyatt Teller (Pro Bowler in 2021) and right tackle Jack Conklin (two-time All-Pro). Wills is charged with protecting the blindside of whoever is playing quarterback and leading the way in the run game.

“I’m looking for a quantum leap in his play,” veteran line coach Bill Callahan told The Chronicle. “I think we all are. He wants to do it. So if it comes from him and he wants to do it, he wants the progress, that’s 99 percent of it.

“That’s awesome. It’s all intrinsic, it’s all self-motivated. So coming from Jed, I think that means a lot. He’s pretty focused.”

“Just want to live up to expectations,” he said. “I want to prove that I’m one of the best tackles in the game.”

He tied for the league high with 11 penalties in 2020 and allowed four sacks, then had four penalties and five sacks allowed last year.

He agrees with Callahan a leap must be taken.

“Yeah, a hundred percent,” Wills said. “I feel like I’ve had a really good offseason. They’ve been really honed in on telling me I’ve been doing good.”
When training camp starts Wednesday in Berea, it will be the next step in his drive to stay healthy and improve. Callahan was impressed with Wills’ “willingness and passion” to work heading into Year 3, and coach Kevin Stefanski said he’s in great shape.

Wills didn’t feel the need to prove his commitment.

“There’s always going to be naysayers and doubters, no matter who you are. You can be the best in the world and there’s still going to be people who say you suck,” he said. “But at the end of the day, it only matters about the people in the facility, in the building and my coaches and my teammates. So, of course, you want to show them that you’re tough and you can do what you want to do and come out and be there for them. But at the end of the day, it’s what you prove to yourself.”

“No. I think everybody who plays has different reasons for playing. Different motivations, different whys,” Callahan said. “I never sensed that he ever questioned if he really wanted to play. That never entered my mind. I never saw signs of that.

“And here’s a guy that’s there for every meeting, every practice, every drill. It’s probably a growing process.”

Wills is 6-foot-4 and 307 pounds with quick feet and an undeniable skill set.

It hasn’t always been obvious.

With the pandemic eliminating the in-person offseason program in 2020, Wills began to make the switch from right tackle, which he played his whole life, on his own. He recorded himself in his stance and taking pass sets and sent the videos to Callahan for feedback.

“It was really challenging to teach a rookie tackle to flip a side, learn left-side mechanics who’d never done it, who’d never practiced that,” Callahan said. “Then last year he was in for the offseason program and was getting better, was improving and then the season hit, and I thought he had a really good training camp, and then he got nicked. He got set back a little bit.”

Wills characterized the Week 1 injury in starker terms. He said he was at 60 percent as he struggled to remain in the lineup before being inactive Weeks 5 and 6. He didn’t practice much as he rehabbed and improved to 80 percent by the end of the season, also missing two games on the COVID list.

“It was like to the point where after we left the game I couldn’t even walk,” he said of the ankle injury. “It was just never the same.”

He said he wasn’t back to 100 percent until a couple of months into the offseason and hopes to avoid a repeat of the injury. The good news is he won’t have to worry about Chiefs defensive tackle Chris Jones, who played a part in Wills’ ankle injuries in the divisional playoff game after the 2020 season and in the opener last year. Jones rolled into Wills in the playoffs and Wills was blocking Jones when he stepped on the leg of another defender last year, but the Chiefs aren’t on Cleveland’s regular-season schedule.

“So both injuries I’ve had have never been self-inflicted. It’s always been somebody else, which is very frustrating,” Wills said. “Anybody who gets hurt and has to play through it will tell you it’s not fun.”

The pain affected his performance in several ways, including not finishing plays.

“I feel like everybody has a mental clock, and that’s something that I definitely want to improve on,” he said. “But at the same time there was a lot of plays where I would see stuff happening. I’d be blocking a guy and a pile would come or the running back’s coming through the hole and people are diving and moving by and I want to get the hell out of the way.

The coaches felt it was important for Wills to learn to play through injuries, which is why they were reluctant to give him games off.

“I thought that he did his best to push through it,” Callahan said. “Because here’s a guy who’s never been injured. Sometimes he wasn’t at full strength and he was pushing through it, so I give him a lot of credit for that. You’ve got to work through it as a pro. I think he learned something about himself through that process.”

Wills laments the missed practice and game time and feels there’s plenty of room for improvement. His motivation hasn’t changed.

“I feel like I’ve always been doubted,” he said. “I grew up in Kentucky where not a lot of guys came out of. I never was supposed to make it this far and now I’m here. And I’ve been two years into this and I think I’ve held my own pretty well. So really just trying to go above and beyond and just prove everybody wrong.”

Johnny Stanton IV proud to speak up as LGBTQ ally
A reason to be cheesin’: New positive attitude, mentor have Browns rookie Alex Wright excited to get the chance to ‘live dream’