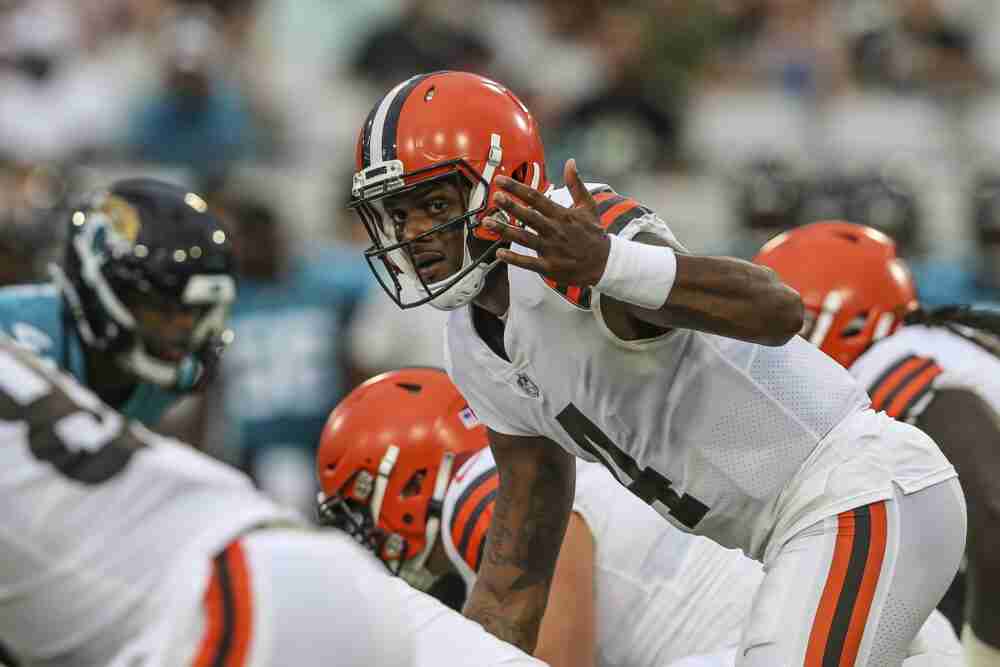 BEREA — The boos carried a volume, intensity and longevity unusual for a preseason opener. And they came in Jacksonville, Fla., which isn’t exactly a hotbed of NFL fandom.

The target was easy to identify: Browns quarterback Deshaun Watson.

“I think once Deshaun came out of the game we got booed less, but you go to a road game, they boo you anyway,” left guard Joel Bitonio said Sunday before training camp practice. “So we’ll see how it goes. I’m sure it seems like more than ever, Cleveland against the world, so we’ll be ready for it.”


Boos weren’t the only thing shouted at Watson on Friday. A video of a vulgar chant in a section of scarcely populated TIAA Bank Field made the rounds on social media over the weekend, and its inspiration were the more than two dozen accusations of sexual assault during massage therapy appointments.

Watson wasn’t indicted by a pair of Texas grand juries and settled 23 of 24 civil lawsuits. He had denied any wrongdoing but offered his first apology Friday before the game during a brief interview with a member of the team’s preseason TV broadcast crew. Watson hasn’t talked to reporters since June 14.

He’s waiting for resolution in the discipline from the NFL. He was suspended for six games by independent arbitrator Sue L. Robinson on Aug. 1, the NFL appealed Aug. 3 and league appointee Peter C. Harvey has yet to make the ruling that will be final and binding.

The decision could come any time this week, or a settlement could be reached between the NFL and NFL Players Association.

The Browns and their fans are sick of waiting to see how much time Watson will miss, and a segment feels the NFL is being too harsh on Watson. That sentiment isn’t widely shared outside of those cheering for the brown and orange.

Hence: Cleveland vs. the world.

“I think it’s pretty obvious,” said Bitonio, who’s entering his ninth season. “But we don’t talk about it. We’re just focused on us.”

The boos and chants will be the new reality for Watson whenever he plays. It’s tough to separate the quarterback from the team, especially when the organization is viewed in a much more negative light after going out of its way to acquire Watson despite the serious and troublesome allegations.

“I’m sure every stadium we go we’ll be booed,” Bitonio said.

Whether it was the rough reception or the rust from not having played in a game since Jan. 3, 2021, Watson’s Browns debut against the Jaguars was one to forget.

He went 1-for-5 for 7 yards. Receiver Anthony Schwartz dropped two passes, but Watson missed high badly on his first throw to Schwartz and threw low on an incompletion to receiver Demetric Felton.

“I don’t think it rattled him,” Bitonio said of Watson and the boos. “You guys have to ask him. I don’t know what’s going on in his mind about what’s rattling him or what’s not.”

Coach Kevin Stefanski cranked up the fake crowd noise during practice Sunday. He wants his players to be prepared but not worried about what they’ll hear on the road.

“We would be doing ourselves a disservice if we focused on anything that people are saying about us before the game, during the game, after the game and those type of things,” he said. “Playing this sport, we understand that you are going to go into some stadiums that present hostile environments. That is how the NFL works. They try to use it to their home-field advantage, but we have an awareness of that.”

In the meantime, Watson must adapt to losing his spot atop the depth chart.

Beginning Sunday, Jacoby Brissett will get the majority of snaps with the starters to get him ready to start Week 1 and at least the opening six games. Watson will still get work, but not as much and not in the starter role. Since he was the No. 12 pick of the Texans in 2017 he’s always been the starter.

“Obviously we know he is going to be unavailable starting Week 1,” Stefanski said. “This has been our plan. I think he understands what we are doing. He is on board.”

Stefanski seemed to be easing Watson into the change. Brissett was first up with the first-team offense, took the majority of the reps — including some with the backups — and completed touchdowns to tight end David Njoku and receiver Anthony Schwartz. But Watson still worked in with the starters.

“It goes back to we have to get everybody ready to play,” Stefanski said. “Deshaun certainly still needs to continue to improve in all areas, so he will get his work.”

Bitonio said lining up with Brissett isn’t new but the increased reps will help.

“The guy’s going to play for at least six games probably, you’ve got to get him ready to play Week 1, and that’s kind of the most important thing,” Bitonio said. “So it’ll be good. We’re going to have a few weeks to get ready and get rolling here and get the offense on the same page.”